Wenger has no sympathy for Reds 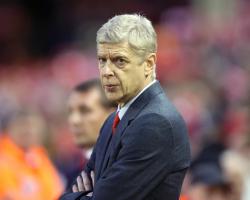 The Gunners host the Reds at the Emirates Stadium aiming to build on the battling 2-1 win at Crystal Palace and return to winning ways at home following defeat on the opening day of the new Barclays Premier League season to West Ham.

Arsenal beat Liverpool 4-1 in April, going on to secure third place in the table and then retain the FA Cup at Wembley.

By contrast, Brendan Rodgers has continued his rebuilding job, having seen Sterling follow star man Suarez out of Anfield when he joined Manchester City earlier this summer.

While Wenger accepts losing key offensive players inevitably leaves a massive hole in the squad, the Frenchman has enough concerns of his own preparing to tackle a team which has won both of their matches so far.

"Liverpool is in a position they can make their own decisions

They refused to sell us Suarez, so I cannot feel too much sympathy for them," said Wenger, who saw the club's ÃÂ£40millon+ÃÂ£1 bid rejected in August 2013, the Uruguay forward eventually joining Barcelona a year later.

Wenger continued: "Let's remember two years ago with Suarez, (Daniel) Sturridge and Sterling, Liverpool scored over a hundred goals, you need special quality to do that, and Sterling was part of that.

We will see that in the longer term."

Wenger now has plenty of forward options himself, which in itself can prove something of a headache.

"It is an impossible job," said the Arsenal manager.

"I always get asked two questions - why don't you buy more players, and how do you keep them all happy now?

"I believe that competition is part of our job, but on the other hand you have to get the number right.

"If you have too many players in the squad, it goes against competition.

"If you have a certain number of players who think they never have a chance to play, you have killed something

Then if you do not have enough players, it creates too much of a comfort zone."

Wenger believes Arsenal have learnt from their shortcomings against West Ham and will not be vulnerable to the potent aerial threat of new Liverpool striker Christian Benteke.

Then again, every game is a new challenge and we have to show that we can do it," said Wenger.

"Benteke he has the stature, he is good in the air, he protects the ball well in that way.

"He is similar to (Arsenal striker Olivier) Giroud, they are players who live from crosses

When there are crosses in the box, both of them are dangerous."

Wenger accepts Arsenal cannot afford too many more poor displays at the Emirates Stadium if they want to mount a serious title challenge.

"If you want to win the championship you need to win your home games," he said.

"It can happen that you use the odd game, but overall you need home strength."