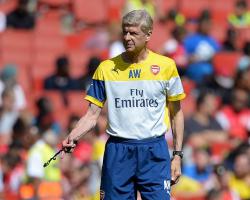 Vermaelen struggled to establish himself in the Gunners first team last season and has attracted interest from a number of clubs this summer.

Wenger refused to discuss the size of the bids received but confirmed the club have received a number of offers for the Belgian.

"Have we received bids? Yes

I can't tell you who from but you will know very soon," Wenger said.

"Are Man United one of the teams to have made an offer? I think they could be in the group."

Vermaelen made just 21 appearances in all competitions last season and only 14 in the Barclays Premier League.

After signing for Arsenal from Ajax in July 2009, Vermaelen became an integral part in the Gunners' defence but form and fitness have since put his starting spot in jeopardy.

Wenger admits Arsenal are willing to sell Vermaelen but would prefer him to join a foreign club.

"He could leave, it could happen, I've said that since the start of pre-season," Wenger said.

"He needs to play now

He has shown an outstanding attitude but he is in a position where we wouldn't stand in his way if he finds an interesting opportunity."

Wenger added: "Ideally, yes, we would like to sell him abroad and that is an option for us.

"I don't want to say how many offers we have but we have offers from abroad as well."

One player who could replace Vermaelen is Calum Chambers, who Arsenal signed for Â£16million from Southampton.

The 19-year-old played at right-back last season in his debut campaign in the Premier League but Wenger believes the youngster is ready to make an impact at the heart of his defence.

"Can he play every week? Maybe not, he is 19 years old, but he can play a major role," Wenger said.

"He has the qualities to impose his quality in this part of the team (central defence) and I believe he can play in defensive midfield as well.

"I believe he is good value for money

He is 19 and a promising talent.

"As a manager you believe in the players when you buy them - w e spent a lot of money on him but overall, in the long-term, it is money well spent

It is expensive now but I don't regret it."