Wenger hits out over respect 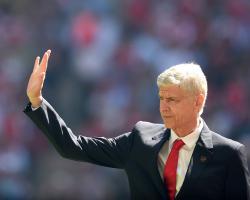 Alex Oxlade-Chamberlain's first-half goal earned the Gunners a 1-0 win in the season-opening Community Shield at Wembley and Wenger a maiden victory over Mourinho, who was unbeaten in 13 prior meetings between the two.

Mourinho made a point of congratulating the Arsenal players afterwards as Wenger walked behind him, their long-running feud showing no signs of coming to an end.

"I believe in a job where you have to respect people and respect everybody," said Wenger, who shoved the Blues boss in last season's Barclays Premier League clash at Stamford Bridge.

"I shook a few hands after the game, but there's nothing special there."

Mourinho said: "You see the images, you see where I am

(I was) there for the winners, to wait for them in a point where you only miss me if you want to miss me.

"Every Arsenal player came in my direction, which was the easiest thing to do.

Mourinho felt the better team lost, but was pointed in his praise of Wenger's approach, saying Arsenal were "a team that leaves their philosophy in the dressing room".

Mourinho, who threw his runners-up medal to an Arsenal fan in the crowd, insisted he did not have a psychological hold on Wenger's teams, but described his 13-game unbeaten streak as an "eternity".

The Frenchman, who disagreed that he compromised on his approach, felt the prior record against Mourinho played on his players' minds and contributed to their display.

"We abandon nothing," Wenger said

"Personally I must honestly say it didn't play on my mind at all.

It was important for them to get that hurdle out of the way."

Arsenal had Petr Cech in goal after his 11 trophy-laden years at Stamford Bridge.

Wenger said: "He did well and maybe he had an influence on the Chelsea players as well.

"They feel to score against him they have to score the perfect goal."

He said: "Confidence-wise it's good, it's positive

It allows you to focus on the next game with belief, to share with your players that you did something right.

Midfielder Jack Wilshere is likely to miss next weekend's clash with the Hammers due to the ankle injury he picked up in training on Saturday, Press Association Sport understands.

Mourinho's side begin their title defence against Swansea and may again be without Diego Costa.

Costa missed Sunday's game with a hamstring problem, something which plagued him last season and continues to perplex Mourinho.

The Blues boss said: "I don't know (if Costa will be fit to play Swansea)

You think I'm lying but I'm not lying.

"If next Friday you ask me does he play against Swansea, I don't answer, because maybe yes, maybe no

I prefer not to answer