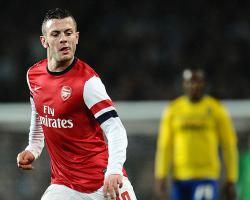 The Gunners head to Anfield looking to maintain their slender two-point lead at the top of the Barclays Premier League over Manchester City and Chelsea, who beat Manuel Pellegrini's side on Monday night.

Wenger revealed Wilshere should be fit for the trip to Merseyside having sat out last weekend's 2-0 win over Crystal Palace.

His return would be a welcome boost as Mathieu Flamini is suspended while both Aaron Ramsey and deadline day loan signing Kim Kallstrom are still several weeks away from recovery.

"We might have Wilshere back and that's basically it

"It is important to have as many players back as possible in the squad.

"In the big games it is always decided by having the complete squad available.

"As many top players as possible because most of the time theses games are decided by players who come on or strong players who have a big statement in a big game."

Suarez has gone on to bag 23 Premier League goals for the Reds and secure a lucrative new contract.

Wenger, though, insists there are no regrets over Arsenal's failure to land the Uruguay forward.

"No, because you have sometimes regrets when a player played for you, and scores goals or does well somewhere else," he said.

"He was never our player

It is just a situation that did not come off and that is it."

Wenger added: "For us the important thing is to win the game

After, the fact that what happened in the summer is nothing to do with that.

"If you want to win the game what is for sure is that he is one of the players that you have to keep quiet."

Asked if he would be likely to look again at a deal for Suarez this summer, Wenger said: "At the moment, no."

Despite Arsenal chief executive Ivan Gazidis stressing the board were confident an announcement on Wenger's new contract would soon be forthcoming, the French coach maintains there is as yet no movement on tieing up the formalities.

Defenders Per Mertesacker and Bacary Sagna are also in talks over new deals, as is midfielder Tomas Rosicky.

Wenger said: "The main news is Bacary Sagna, that we expect (to sign) and a few other players, but there is no (fresh) news there."