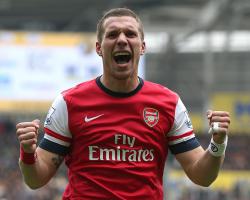 Mancini has confirmed to Italian news channel Sport Mediaset that the 29-year-old is "part of a list of players that we are following", with Podolski unhappy at a lack of first-team opportunities for the Gunners this season.

Wenger, however, knocked down those reports, which have suggested a loan deal, as he looks to strengthen the squad, not weaken it when the transfer window opens again in January.

"That is a joke

Inter Milan is not serious," said Wenger at a press conference on Tuesday ahead of the Premier League match at Southampton.

"It is nothing serious

They talk, there is only talk."

Wenger is keen for Podolski to remain part of a squad, which has seen attacking options hit by a three-match suspension to Olivier Giroud and Danny Welbeck having picked up a thigh problem during the win at West Ham on December 28.

Apart from that, what it is to be professional is that as long as you are somewhere, you give your best to justify your wages and your love for the club," said Wenger.

"I hope so (that he will still be here at the end of January), yes."

Wenger rejected the notion that Podolski, who won the World Cup with Germany in the summer, would benefit from a loan spell anywhere.

He said: " I don't really doubt in some positions (situations) where players need experience, but that is not the case for Podolski

"For players who need practice because they are at a very young age, like Yaya Sanogo it is not impossible."

Wenger confirmed Arsenal would look to bring in some cover next month, given the number of injuries suffered to key men, notably in midfield

"There is a need there, but the right opportunity has to come up," he said

"To buy (just) to buy is not what we want to do, but if the right opportunity comes up, we will do it."