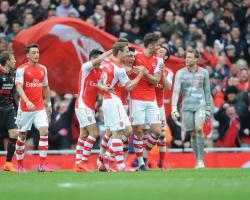 The Gunners dealt what could prove to be a potentially fatal blow to the Reds' hopes of securing a return to the Champions League after a comprehensive victory at the Emirates Stadium left Brendan Rodgers' side now some seven points adrift.

Arsenal moved back above Manchester City, who slip to fourth ahead of Monday night's game at Crystal Palace, but remain some seven behind Chelsea after the Blues beat Stoke in Saturday's late kick-off at Stamford Bridge.

Wenger's men are, though, the side in form, having lost just twice in their last 12 matches in all competitions - a run which has propelled Arsenal not only up the table, but also into the FA Cup semi-finals at Wembley.

"If there was 15 (league) games to go, you would not complain," the Arsenal manager said.

"We had a very slow start this season, when we had many important players out together, and we dropped too many points.

"We played six games in the Premier League and won two, after that you have a mountain to climb.

"But now you can see that when we have everybody back, we can compete and the number of points we have made shows we have the quality to fight at the top."

Arsenal host Chelsea on April 26, but Wenger concedes even if they were to win that contest, overhauling such a points deficit would be a big ask.

"For the title we need us to be perfect and Chelsea not to be perfect, so let's focus on what we can master which means our own performance," he said.

Arsenal had produced an energetic start to the Saturday lunchtime kick-off, but saw early efforts scrambled away by a combination of fine reactions saves by Liverpool goalkeeper Simon Mignolet and some desperate defending.

They then had to soak up a spell of pressure from the visitors - which saw Liverpool contract rebel Raheem Sterling miss a golden chance to open the scoring - before going ahead through a fine finish by right-back Hector Bellerin on 37 minutes.

Before Liverpool could regroup, Mesut Ozil had curled home a 20-yard free-kick, with Alexis Sanchez's fierce drive on the stroke of half-time effectively ending the match as a contest

Reds skipper Jordan Henderson scored a penalty on 76 minutes, but any hopes of a dramatic comeback disappeared when Emre Can was sent off for a second caution.

Arsenal striker Olivier Giroud netted a fourth in stoppage time, curling the ball in from 20 yards to notch his seventh goal in as many appearances.

Barcelona-born Bellerin, 20, has come of age after being drafted into the senior side initially as cover for injured France international Mathieu Debuchy, with Wenger admitting the jet-heeled Academy product is one of the "surprises of the season".

Bellerin, who had an unproductive loan spell at Watford last season, hopes to make the most of his opportunity.

"At the beginning of the season I did not expect to be in the team, but obviously I am really grateful for the coach for giving me the chances that he's given me," Bellerin said.

"I am just trying to pay him back for the trust he has shown in me and just want to continue to work hard, trying to be the best in every performance that I have."

Arsenal hope both defender Laurent Koscielny (thigh) and midfielder Aaron Ramsey (ankle) will prove to have just minor problems and be in contention for next weekend's trip to Burnley.

Liverpool will have little time to feel sorry for themselves, with an FA Cup quarter-final replay at Blackburn on Wednesday night.

Henderson said on LFCTV: "We knew it (top four finish) was going to be difficult before we came here, and it now makes it a bit more difficult, but that does not mean we just give up.

"We have seven games left now and we need to try to win everyone, and if we do that, then you never know.

"We have a big game straight away and we need to learn from this one, to move on."