Wenger- I feared for Ramseys ankle 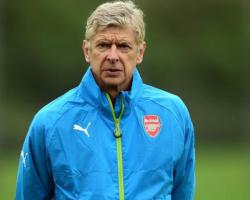 The club are hopeful Ramsey's injury - suffered during the Euro 2016 qualification victory on an artificial pitch in Andorra - will prove "short-term" and he could be in contention for Saturday's Barclays Premier League meeting with Manchester City.

Ramsey, who recovered from a broken leg he suffered against Stoke in February 2010, was forced to miss a crucial period last season with a niggling thigh problem, which saw the Gunners' title bid fade before he returned to score the winning goal in the FA Cup final at Wembley.

"The first news is not bad," said the Arsenal boss

"He will be assessed today, he has a little chance to be available for Saturday

He had an ankle sprain, it is a minor one, that is for sure.

"I am relieved because I had been haunted in my head by last year's injury that was much more serious than expected, at the start it was a little muscular injury and then it was three months.

"Even if he is not completely ready for Saturday, it is a short-term injury."

Arsenal should have Mikel Arteta and Kieran Gibbs back in the squad following their fitness issues before the international break, while playmaker Mesut Ozil has shaken off the ankle problem which saw him return to London from Germany ahead of schedule.

Theo Walcott is another couple of weeks away from a return after a serious knee injury, so could be fit for the visit of Tottenham on September 27.

England forward Danny Welbeck joined the Gunners on transfer deadline day from Manchester United, and could be given his debut in a central attacking role against City as Olivier Giroud faces several months of rehabilitation from a fractured foot.

The 23-year-old scored both goals in England's 2-0 Euro 2016 qualifying win away to Switzerland.

Wenger is confident Welbeck will adapt to his new surroundings quickly.

"Danny Welbeck is an ideal signing for us because he can play through the middle, where I think is his best position but (he can play) as well on the flanks," said Wenger.

"His qualities are his team attitude and his pace as well

As you could see with England; his goalscoring."

Wenger, who indicated he would have initially preferred a loan deal for the player, added: "It (adapting) is not difficult because it is not in a position where you need a lot of coordinated work, tactical work

"It is up front, so is a position where you can play free and go for it."