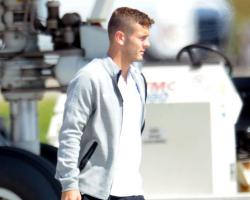 Wilshere was criticised by his manager last season after he was pictured smoking a cigarette outside a nightclub and, in the aftermath, pledged it would not happen again.

The 22-year-old was photographed smoking again this week while on holiday, though, and Wenger, while not overly concerned, wants to find out what exactly happened.

Speaking after Arsenal's friendly at Boreham Wood - which they won 2-0 - he told his club's official website: "I haven't spoken to him (Wilshere) so it's very difficult for me to make any statement.

"I know what you can make of pictures - I have to speak to him really to see what happened before I come out publicly.

"I'm not deeply concerned by it

A common consensus is that Wilshere's career has stalled over recent years, with injury and form taking a hold.

Wenger will speak to his player next week but insists next season could be an important one for him.

"He's at an age where you want him to move forward," he said

"He has the potential

I believe for him, the most important (thing) now is to have a good preparation and focus on getting really fit.

I'm sure that (if) he's injury free, he will have a great season."

Cesc Fabregas opted to go to Chelsea rather than return to Arsenal - as he could have done - though.

I don't know who tells the truth here or not

He landed where he wanted to go," said Wenger, responding to why Arsenal did not move for their former captain.