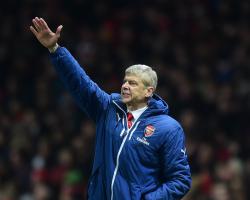 The Arsenal manager has endured a turbulent relationship with the club's supporters this season following disappointing defeats against the likes of Swansea, Manchester United and, most recently, Stoke.

Banners have urged the 65-year-old to leave and, following the defeat to the Potters last weekend, Wenger was hit with a volley of verbal abuse as he boarded the train back to London

But, as Olivier Giroud and Santi Cazorla both struck two goals in a straightforward victory on Saturday, the majority of fans inside the stadium showed their support for the long-serving boss.

Giroud's header put Arsenal in front at the break before Cazorla, on his 30th birthday, hit a second, with Giroud making it 3-0 shortly afterwards.

The visitors pulled one back through Ayoze Perez, but, by the time Cazorla added a fourth with a late 'panenka' penalty, Wenger was the toast of the Emirates.

"I'm grateful for that and I enjoy it, but the most important thing is the way we play football," Wenger said of the fans singing his name.

"I think what is most important is that our fans go home happy because we have played well and won.

"My job is to win football games and make people happy.

"What happened last week - I have worked for 18 years in this country and I've been accepted by 99.9 per cent with a big respect

I can take the 0.1 per cent and live with it

My job is to make people happy - if they are not happy, I have to live with it."

Giroud, who now has four Premier League goals for the season as Arsenal closed in on the top five, was pleased to hear the fans getting behind Wenger.

"It's nice to hear the fans supporting the boss and obviously it's a fantastic night for us and we're happy for that," he told Sky Sports 1.

''It's always the same when you're losing, the first one in front of the criticism is the boss

We will always be all together, keep the faith, keep working hard and I think there're no thoughts about changing the boss, because he's still the man for the situation.''

Giroud suffered a broken leg earlier in the season, but is back to lead the line for the Gunners, with summer recruits Danny Welbeck and Alexis Sanchez working well alongside him.

And the France international was praised by Wenger.

"He's still not 100 per cent there but he gives a presence," he added.

"He links up well, plays good one-twos and protects the ball well

When we have to kick the ball long because Newcastle closed down our centre-backs well, you always have a good chance to win the ball."

Although Alan Pardew admitted his Newcastle side were not good enough to warrant getting anything out of the game, he never gave up hope that Arsenal would crumble when 3-0 up - as they did to draw 3-3 against Anderlecht in the Champions League last month.

"In terms of the two results the first goal was going to be more significant today; the fact they had got beat and we had a good result (in beating Chelsea last weekend)," he said.

"I still felt, even at 3-1, that the game was in the balance

The demons might have returned from Anderlecht, but we couldn't get ourselves into that position and probably didn't deserve to.

We weren't as efficient with the ball as we have been.

"A lot of the credit has to go to Arsenal, they didn't give us a lot of time and they were quick

We grew into the game a little bit and had a chance to equalise that we should have taken."