Wenger- It was tight at the top 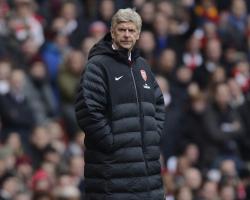 The Gunners, who will play Hull in the FA Cup final at Wembley next weekend, signed off their league fixtures with a routine 2-0 win at Norwich, whose relegation back to the Sky Bet Championship was confirmed as a result.

Arsenal were top of the table for some 128 days over the course of the season, but faded from February as injuries took their toll before finishing with five straight wins to claim fourth place, and seven points adrift of the champions.

"At the top, everybody who wins it can say they deserve to win it," he said

"But Man City were just getting over the line without the brilliance they had shown at the start of the season, but they had experience, quality and congratulations to them

"They came a little bit from behind because they had three games in hand at some stage, but they managed to win these games."

Wenger added: "Unfortunately it's the first time in the Premier League that you finish fourth with 79 points and it was very tight.

Norwich goalkeeper John Ruddy made three good saves in the first half before he was beaten by a fine strike by Aaron Ramsey on 53 minutes.

Defender Carl Jenkinson swept home another for his first Arsenal goal as the visitors closed out a comfortable victory ahead of their Wembley return, while Norwich, who sacked manager Chris Hughton with just five matches left, must now regroup for life in the Sky Bet Championship along with Cardiff and Fulham.

Wenger said: "We have won 11 games away from home, I think it's the best in the league and it was our 17th clean sheet - that is remarkable as well.

"We just wanted to finish the season well and we did it in a serious way, so it is a good basis to prepare for the FA Cup final."

England midfielder Jack Wilshere made his long-awaited return from a fractured foot when coming on in the second half, and Wenger revealed there was also positive news on the fitness of Alex Oxlade-Chamberlain, who is also hoping to be named in Roy Hodgson's World Cup squad on Monday.

He can play now, so it shows you that there is no problem for him to be available for England," said Wenger.

"The news (on Oxlade-Chamberlain) is good

He should reintegrate into the squad on Wednesday in normal training.

"He will be available for (manager) Roy (Hodgson) to pick him, I wouldn't be surprised if he was picked."

Wenger added: "If the players are not injured, then players like Oxlade-Chamberlain, they are not overplayed, they can absorb competition to come back and need minimal rest before they start competition next year

I am not too worried for that.

"The only danger for us is if the player is not medically fit, but I trust the medical team in England if they travel.

"I think they have their first camp in Portugal and they will know after that."

Wenger has yet to sign a contract extension, but is expected to stay on at the Emirates Stadium.

The Arsenal manager dismissed reports he was set to join Monaco instead.

He said: "I wish Monaco well, but there is no interest there."

Norwich are expected to shortly announce their new manager, with former defender Malky Mackay a leading contender having now settled his dispute with former club Cardiff.

Neil Adams, promoted from youth team coach, feels the Canaries have the nucleus of a group capable of mounting a promotion challenge.

" You would hope we can keep as many as we can because we want to come straight back up next season," he said

Adams maintained there had been no fall out with club-record signing Ricky van Wolfswinkel, who has managed just one goal, and was not in the match-day 18.

"Nothing happened as such

"I didn't see a strop and he didn't refuse to be a substitute."