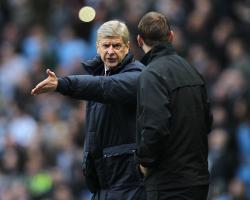 Walcott is set to be sidelined for six months after suffering anterior cruciate ligament damage when making a defensive tackle in the FA Cup third-round win over Tottenham on Saturday.

The 24-year-old was a potent weapon in Arsenal's attack, offering a different dimension with the England forward having netted five goals since his return from a stomach injury.

Arsenal will now have to plan for the rest of the campaign without the electric pace of Walcott, but the imminent return of Alex Oxlade-Chamberlain from his own five-month lay-off with a knee injury and the emergence of Serge Gnabry - said to have sparked interest from Borussia Dortmund - does at least provide Wenger with wide options.

Wenger, though, still needs cover for lead frontman Olivier Giroud, and is said to be keen on a loan deal for Real Madrid's promising 21-year-old Alvaro Morata, whose current first-team opportunities are limited at the Bernabeu. However, chances of pushing through a big-money transfer such as Atletico Madrid's Diego Costa at this time of the season are historically difficult.

"We lost a very talented player, a very intelligent player and a player who was just grabbing his form again," Wenger said.

"From game to game he became more influential, you have seen a complete player.

"He can always decide a game through a final ball or through a goal. Sometimes in the same game he does both."

Wenger accepted he faced a difficult conundrum of how best to strengthen the squad for the challenges ahead over the next six months.

"[Walcott's injury] has accelerated [transfer] speculation first and of course my desire as well - but let's not forget about Serge Gnabry who can play in the first team," the Arsenal manager added.

"We have Oxlade-Chamberlain back and we have many other players who can play on the flanks so to find better solutions than what we have internally will not be easy.

"Up front we lose Theo as a potential central forward and that's maybe where we have to look outside, but we hopefully have (Nicklas) Bendtner back in three weeks.

"We are there for the opportunities, but it is very difficult at the moment."

Walcott's loss is a major blow for both club and country, with the pacy forward set to have been a key part of England manager Roy Hodgson's plans in Brazil this summer.

Wenger, though, is confident Walcott's "balanced" personality can help recover fully from such a devastating setback.

"Theo is handling it as well as you can when you have had such a shock because he is mentally strong, is very balanced as a person and he can put it into perspective," Wenger said on Arsenal Player.

"We know that he will have the dedication and the serious attitude to come back as strong as ever."