Wenger- Judge me in May 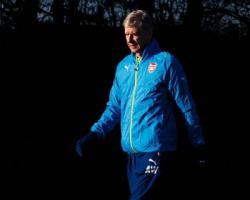 The Gunners headed to Istanbul on Monday looking to quickly get over the Barclays Premier League loss at Stoke, where they had trailed 3-0 at half-time having gone behind after just 19 seconds on another afternoon to forget at the Britannia Stadium

However, the 65-year-old insists everyone must take a distance on current issues, with Arsenal having left several senior men such as Alexis Sanchez back in London and travelled to Turkey to face Galatasaray with half-a-dozen youngsters for the final Champions League Group D tie, the team already qualified for the last 16

''Look, the response after a defeat is always very important

What we want is to come back quickly to a strong defensive performance, what we had before the game (on Saturday),'' said Wenger, whose side are sixth in the Premier League table

''We showed a lack of experience defensively (at Stoke), but we could have scored four or five goals in this game and the team response during this game was quite strong

''For the rest, you expect that everyone is disappointed after that result, but the Premier League is difficult

Full-back Mathieu Debuchy returns from three-months out with an ankle injury, while Hector Bellerin and Calum Chambers will also play

Wenger added: ''The players who needed it stayed behind - like Cazorla, Sanchez, Gibbs - Giroud is not qualified - and Welbeck, who could have travelled but recently had a little knee problem, so took advantage of that to rest him

''Sanchez had a groin problem for some time, and he has played 27 games...

it is more just the number of repetitive games we have.''

"Our goal will not just stop our opponent

We want to find the opportunity to test ourselves at this level," he said

"We'll try to pressure Arsenal up front and not let them get up the field easily.

"If Arsenal react well to our pressing, then we'll be strong in the defence and aim for a counter-attack."