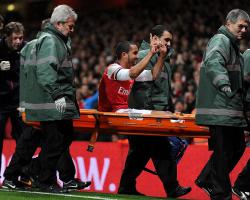 The Gunners booked their place in the fourth-round draw after Santi Cazorla drilled in a fine opening goal on 31 minutes, before Tomas Rosicky doubled the lead on the hour with a well-taken finish after robbing Danny Rose on the halfway line and sprinting clear.

There was, however, a controversial end to what had been a fiercely contested north London derby when Walcott was taken off on a stretcher with a knee injury.

Walcott was treated by medical staff onto a stretcher, before being taken around behind the Arsenal goal, in front of the Spurs fans - some of whom threw objects, which appeared to include coins and plastic bottles.

Walcott signalled a "2-0" gesture with his hands, before donning an Arsenal scarf as he was carried on around the stadium.

The Football Association will wait until receiving the match report of referee Mark Clattenburg before deciding whether the incident warrants investigation.

Wenger, though, moved to diffuse the situation.

"The doctors said to me that the coins had been raining over his (Walcott's) head and they had to protect him, maybe that is why he did that. Yes (the coins came before the gesture) that is what I have been told," said Wenger.

"After that, what he did is not offensive. You look for every single incident, I can understand that, but it is an action that didn't offend anybody.

"I have seen the pictures after the game and it does not even look aggressive, he is smiling."

Wenger, though, maintained this situation did not merit any disciplinary action.

"My response will be simple, they (FA) have seen the pictures on television. If they judge it offensive, what can I say?" the Arsenal boss added.

Tottenham manager Tim Sherwood, meanwhile, revealed in his post-match press conference he had not witnessed the incidents.

Sherwood said: "Someone just mentioned it to me in there. I didn't see it.

"Is that what he did? Well, listen I don't know Theo, I don't know him as a lad. It could have been a bit of banter, possibly.

"If they (Tottenham fans) did then it's a problem, isn't it? If they didn't then it's not a problem."

Should Walcott's injury prove serious, it could force manager Wenger into the transfer market to bolster the depleted attacking options of the Barclays Premier League leaders, with forward Nicklas Bendtner set for a month on the sidelines because of an ankle problem.

"For Bendtner, it will be for one month, we expected it could have been more, but we had good news," said Wenger.

"With Theo, he has a knee problem.

"We don't know if it is a stretched ligament or just a kick, he got two kicks onto his knee.

"Of course if we lose Theo for a longer period, it is a problem."

The Gunners boss added: "I am waiting to see now who walks out there and knocks at the door, waiting to come in, but honestly, do we find better than the players that we have got?"

Wenger felt his side, which included several fringe players, had been good value for their win.

"The game was played at a good pace and I think we controlled quite well both sides of it; the defensive and the offensive," he said.

"We always looked to have a good discipline and to be tight at the back.

"Every time, when our game is based on movement and quick, sharp passing, we looked dangerous."