Wenger- Liverpool are in title race 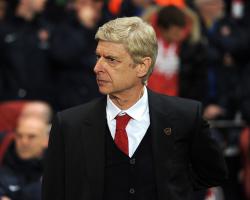 Arsenal take on Stoke at the Britannia Stadium on Saturday, keen to build on their 4-1 thumping of Sunderland.

Wenger has challenged his squad to generate consistency for the season's business end, to capitalise on what he believes could be one of the tightest title races in years.

"It's very tight at the top, Liverpool are in the race as well, and they have an advantage as it is the only competition they play," said Wenger.

"I hope it will be tight until the end, because then it will be interesting and if you are consistent then you have a chance to win.

"You need to be at your best to find the resources to win games, this is a big game for us and of course this weekend we just want to focus on the three points.

"We got the three points against Sunderland who are a tricky team, so we want to do it again.

"We have to look at our results, just focus on that and not speculate too much because we're in a period where we have to move forward."

Wenger admitted Arsenal may be more suited to taking on a team built by the former Manchester United and Wales striker than facing up to Pulis' pressgang tactics.

"We had some bad memories but also some good ones as well," said Wenger.

"It's a stadium where before, first of all the pitch was narrow and difficult to play, a bit more open to the wind.

"But recently we have shown as well it's down to the performance on the day.

"If you perform on Saturday that's all that counts.

"Yes it probably is better for us now though, because we went sometimes to Stoke, who had a rough style, we had young players and it was difficult.

"But they have good players, they have done well in the league, they qualified for the Europa league.

"So they are a real challenge.

"Every manager has his own style, he (Hughes) has experience and has shown he can do well.

"Given time he will print his own style of play."