Wenger- Luck was on Citys side 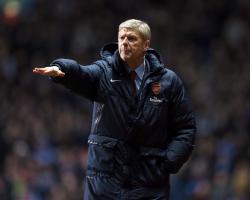 City took full advantage of Arsenal's midweek 2-2 draw at Southampton to thump Spurs at White Hart Lane and move a point ahead at the top of the Barclays Premier League.

Wenger, though, feels the final scoreline does not tell the whole story.

Spurs had a goal from Michael Dawson - which would have levelled the match at 1-1 - disallowed, before City benefited from a controversial penalty award at the start of the second half

The assistant referee ruled that defender Danny Rose had fouled Edin Dzeko, but replays showed Rose had touched the ball and on Friday the red card he was shown was rescinded.

City managed 24 shots and 66 per cent possession, but Wenger believes the match could have gone in a different direction.

"Everybody speaks of course that they had an impressive win, and a great quality game as well at Tottenham, but if you analyse it well this game could have turned," said Wenger.

"All the turning points went in their favour

If they had not, then you are not sure they would have won the game."

With City hosting third-placed Chelsea on Monday night, Arsenal could go back to the top of the table if they beat Crystal Palace on Sunday.

Wenger challenged his men to focus on their own performances rather than worry about what City might produce.

"At the moment they are on fire, but I believe we have just to focus on our own run because if you look at the schedule if we are consistent we have a good chance to do it," said Wenger.

"You cannot speculate on any weakness in Man City in the coming months, so let's focus on us and our strengths.

"I believe we can (win the title) if we keep the consistency and manage to win the big games - one of them will be Man City at home, and of course that will be very important."