Wenger misery at not signing duo 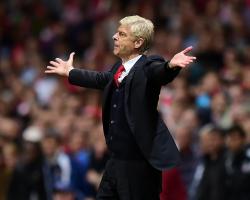 The Gunners boss endured nine years without a trophy before winning the FA Cup final in May, with Chelsea's Drogba and Ronaldo of Manchester United contributing to the drought.

"I would have loved to have managed Didier Drogba, for two reasons," Wenger said, in a sponsor question and answer session.

"One, I missed him when he played at Le Mans in France, not even in the top league

"And secondly, because he hurt us so much in big games that all this pain would not have happened."

Asked his biggest near miss in the transfer market, Wenger said: "My biggest regret, I was so close to signing Cristiano Ronaldo.

"And not only did I not get him, but he signed for Manchester United.

"That, of course, still hurts today."