Wenger never gave up on Bendtner 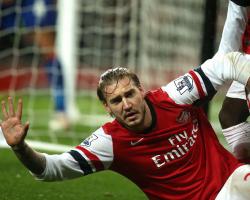 It had looked like the Bluebirds, with potential new boss Ole Gunnar Solskjaer watching from the stands, would hold out for a much-needed point in the wake of relentless Arsenal pressure.

However, with just two minutes left, substitute Bendtner crashed the ball in from close range after David Marshall had saved Bacary Sagna's header before, in stoppage time, Theo Walcott sealed the victory which took the Gunners back to the top of the Barclays Premier League table.

Bendtner, however, is now set for a spell on the sidelines having sprained his ankle in scoring the goal which Wenger believes was reward for his positive attitude since returning to the first-team picture this season.

"Nicklas is a player who has gone through some difficult periods, so I just want to give him great credit," said Wenger, who was already without lead striker Olivier Giroud because of his own ankle problem.

"I told him already today that he is back to the level I want him to be at, and if he continues to develop like that he will come back into the team.

"Unfortunately he got injured today. He was a bit unlucky, he said he landed on the foot of a Cardiff player and sprained his ankle. It looks like it is not a question of days, but weeks.

Bendtner, 25, has endured a testing spell of his career, with unsuccesful loans at the likes of Sunderland and Juventus before seeing hopes of a move to Crystal Palace on transfer deadline day fail to materialise, often becoming a focal point for fans' frustrations.

Wenger continued: "I never give up on people because you always have to give them credit.

"I know the expression of the fans is only the diagnosis of the day - they are always ready to change their mind if you put the effort and the performance in."

Bendtner is out of contract at the end of the season, and so could now sign an agreement to move abroad as a free agent.

Wenger said: "It is January 1 so we cannot stop him [talking to clubs abroad], but he says he wants to stay here.

"If he is focused on staying with us and his job, he is a great striker."

The Gunners boss maintains he will wait to decide how he tackles the January sales, with the squad in need of some attacking reinforcements.

"I don't know, it doesn't mean we go straight from Nicklas' ankle straight to the transfer market," Wenger said.

He said: "It looked like in the last 25 minutes like the goal was coming, but sometimes it doesn't - and not only does it not come but you are then caught on the counter-attack.

"We needed resilience and intelligence not to make a mistake at the back and continue to go forward. In the end, Nicklas got us great relief."

He said: "I believe Ozil will be short for Saturday (against Tottenham in the FA Cup) and should be ready for Aston Villa (on January 13)."

Arsenal are now a point ahead of Manchester City once again, with Chelsea also having won on New Year's Day, as did Liverpool.

Wenger said: "We have a good togetherness in the side, the players come on with the right attitude and that makes the difference.

"You know that if you do not have that in the championship, then you have no chance to do it.

"We have that in the squad, we have to take care of that spirit and show it in every game."

For Cardiff, all the uncertainty off the pitch has not helped produce results, with the defeat at Arsenal making it just one victory from 10 league matches.

Caretaker manager David Kerslake said: "We knew coming here, they have got wonderful talented players and that we would be put under the kosh, but you saw the discipline of the side, the way they defended for each other I thought we were going to hang on."