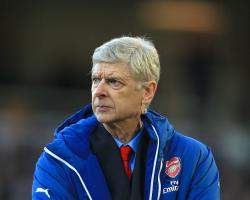 The north London side have been regularly left short of defensive cover this season with the likes of Laurent Koscielny, Kieran Gibbs, Nacho Monreal and Mathieu Debuchy all suffering injuries.

Debuchy is expected to be out for another three months after undergoing surgery on his right shoulder, leaving Wenger with only six fit senior defenders at the club.

"We can cope because we have (Calum) Chambers, (Per) Mertesacker, Koscielny," Wenger said.

"So if we have another injury or two we will struggle

The Gunners have been linked with a number of central defenders in the January transfer window including West Ham's Winston Reid and Borussia Dortmund's Mats Hummels.

"Why have we not signed a defender? We haven't found one

We are not the only ones working on the case," Wenger said.

"It is not a supermarket where you go in and buy a defender.

"It is a market that is very restricted

The players who can strengthen the best 10 teams in Europe, you don't find many and it is the same for everybody.

"We are a big attraction, of course we are

If it was easy we would do it.

"We have made enquiries but then you have the second handicap - who wants to sell their best player, especially a central defender in the middle of the season?

Arsenal are close to completing a deal for Legia Warsaw's 17-year-old midfielder Krystian Bielik, who Wenger believes is ready to join up with the first-team squad straight away.

Clubs increasingly use statistical scouting systems to judge potential recruits, but Wenger insists nothing can beat the human eye.

"What is most important is the eye," he said.

"For example, you can have very good numbers for a defender but if he is suspect to one big mistake every game or every five games, the numbers will not detect that.

"Still the priority is the attitude of the player and your eye - does he read the game well?

"The numbers over 15 games can be very good but, in the big games, that's where the players should be judged for us."