Wenger- No error with Ozil care 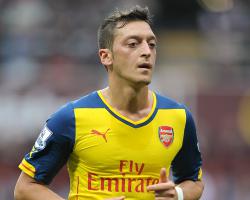 out for up to two months

Ozil, the Gunners' club record signing, faces a spell on the sidelines after scans by the German national team discovered a "partial rupture of the outer band of the left knee joint".

It has been suggested Wenger went against the advice of both the player and Arsenal's own medical staff by keeping Ozil on at Stamford Bridge as his side looked to get back into a match they would go on to lose 2-0.

However, the Arsenal manager insists there was nothing untoward and he had even stressed to Ozil the need to come off if feeling any muscle problems.

Speaking at a press conference ahead of Saturday's game against Hull, Wenger said: "He (Ozil) told me that once it was discovered on the scan

He did not tell me anything during the game, I did not even know.

"What happened was that at half-time, just before we went out, the physio told me 'Ozil has a little pain with his knee, but it is not bad'.

"He wanted to go on and I told him 'if you don't feel well, tell me and I will take you off straight away'

He never did that during the whole game, and after I left him on because we were in a position where we needed to score a goal and he can deliver the final ball.

"Then after the game, he went to Germany

With Germany, they thought at the start it was nothing.

"We played on Sunday, on Monday he was off, and on Tuesday they gave him the day off

He was supposed to practice on Wednesday.

"On Wednesday morning, he said he could still not practice.

"They sent him for a scan, and in this scan they discovered that he has a knee ligament injury which is quite serious."

Ozil is not expected to return to action until the start of 2015.

Wenger added: "That is the only positive, that he will get the rest that he had not maybe enough after the World Cup.

"Although I must say, I gave them until August 11, Germany played the final on 13 July, that was a month and should be enough after a big competition.

"He is out for a while now, I think at least six weeks."

Arsenal have seen several players hit by injury, with defender Laurent Koscielny out because of an inflamed Achilles, the latest casualty.

However, winger Theo Walcott is set to play for the Under-21s on Friday after nine months out with a knee injury, and captain Mikel Arteta could feature against Hull, while Aaron Ramsey is expected back for the Champions League tie in Anderlecht.

"We have as well (Olivier) Giroud ahead of schedule, so we have some positive news, but in the defensive department, with the suspension of (Calum) Chambers, we are a bit short (on Saturday)," said Wenger.

Chambers is one player who could be in contention for England's Under-21 squad at next summer's European Championships following successful qualification by Gareth Southgate's squad.

Wenger, though, feels for those who have already been promoted to the senior set-up, it should be club before country.

"Once a guy has moved up to the full national team, you put him down (again to the U21s) he is never good," said Wenger.

"Apart from on the selfish front for us when a guy has played 50 games, it is better a guy has a good rest during the summer

but most of the time, when they move down, they are not completely at their quality."