Wenger- No player too good for us 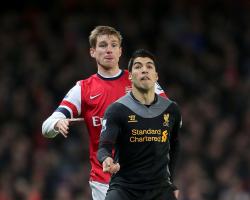 The Gunners looked to land the Liverpool forward 12 months ago with a bid of Â£40million plus one pound - but the move proved unsuccessful and the Uruguay international went on to start for a Liverpool side fighting for the title.

Suarez, currently banned from all football for four months after biting Italy's Giorgio Chiellini during a World Cup group game, has now moved to Barcelona - with Gerrard admitting he had told the 27-year-old to stay put last year.

I said: 'Don't go to Arsenal'," the Liverpool captain revealed.

With all due respect to them, I said to him that he was too good for Arsenal."

But Wenger, who instead signed Real Madrid's Mesut Ozil for a club-record fee, insists no player would deem themselves too good for his side.

"You're never too good for Arsenal and Steven Gerrard knows that," he said during his press conference ahead of this weekend's Emirates Cup.

But it didn't happen, and anyway, Suarez left."

Wenger has been busy again this summer with the addition of Chile forward Alexis Sanchez, whose place at Barcelona has since been filled by Suarez, as well as England youth international Calum Chambers and Newcastle defender Mathieu Debuchy.

Those deals mean, for the first time in several years, that Wenger has his new recruits in well ahead of the start of the season - even if he may not yet be finished in the transfer market.

"I'm very happy because I did what I wanted, and I am still open to do more," he said.

"Let's not forget that we are at August 1 today, and the transfer window closes on the 31st

For years, it's a long time I didn't sit with you here on the first of August having done quite a lot.

"We are a bit ahead of what we usually do, because the availability on the market was bigger and earlier than before."

There may yet be players moving away from the Emirates Stadium as Wenger admitted the future of reported Manchester United target Thomas Vermaelen remains unclear, with the club captain unhappy at his lack of first-team action last season.

"At the moment Thomas Vermaelen is here," added Wenger.

"He is injured at the moment with a short-term injury

It (a move) could happen, yes it's a possibility that he goes

If he goes we have to replace him because he's an important player in our squad.

"I expect him to stay but he, of course, did not play enough games last year

For me he's a very important player but I couldn't guarantee him the games he wanted last year."