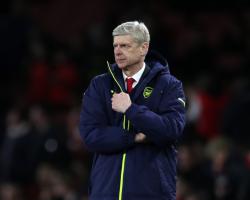 The Frenchman has come under increasing pressure following Tuesday's 5-1 home defeat to Bayern Munich, which saw the Gunners crash out of the Champions League 10-2 on aggregate as they exited at the last-16 stage for the seventh successive year.

In his first press conference since then, Wenger reiterated his post-match stance that Arsenal had been harshly treated by the referee, with Laurent Koscielny sent off in the second half, and suggested the result would not have an impact on his future.

"It's easy for me to assess the game because we watch and analyse it and I think overall at 11 against 11 we produced a top-level performance," he said

Before the game, people said we had a one per cent chance

"I think in this game we produced a performance

"I have worked for 20 years to make our fans happy and when we lose games I understand they are not - at certain times you have to accept different opinions."

Asked whether he would consider the fans' displeasure when deciding his future, Wenger added: "Y es - you consider

It is not the most important factor to consider of course."

Theo Walcott had hinted in the week that there was some unrest amongst players and staff - following on from reports of a training bust-up involving Alexis Sanchez and his team-mates last week - but Wenger was quick to downplay those claims.

"I think a lot has been said about that is exaggerated," he added

"We have a good united group in terms of the group

"When you go through disappointing results you have disappointment, but the best way to respond is to show how united we are on that front