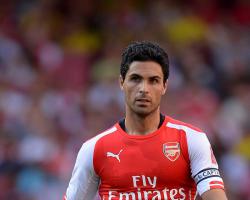 The full extent of Arteta's problem is yet to be determined but Wenger accepts to lose the defensive midfielder for a long period would be a blow, and may well in turn force his hand to try to bring in cover ahead of the closing of the transfer window, with Real Madrid's Sami Khedira and William Carvalho at Sporting Lisbon reported targets.

Everybody else we have to check this morning, but we have no major problem apart from Mikel," said Wenger at Thursday's media conference.

"He had a scan yesterday afternoon

I haven't got the result

I have a meeting at 10am to check about that

I don't know how long he will be out for.

"We will be a bit short of course

If it is a long-term injury, that puts us in a position where we have to be creative."

Asked if he was generally keen to bring in a defensive midfielder as cover, Wenger said: "We are not against that.

"We are like you, we listen to the names, but sometimes I look who we buy in the media, but at the moment as I told you we are not in an emergency case.

"We have the players we want but we are open as well to any opportunity until the end of the transfer window who can strengthen our defensive department in quality and number."

Arsenal have also been linked with a move for Greek defender Kostas Manolas from Olympiacos.

"I can't tell you how likely I am (to sign anyone), I just said to you I am open to doing it

It has to be linked with the needed quality," said Wenger.

"If you ask today 20 top clubs in the world what they look for, they all look for the same positions, so that means it is not necessarily out there."

The Gunners, though, will be boosted by the return of German World Cup winning trio Per Mertesacker, Lukas Podolski and Mesut Ozil, who could all feature in the squad at Goodison Park ahead of a more likely return for the second leg against Besiktas next Wednesday.