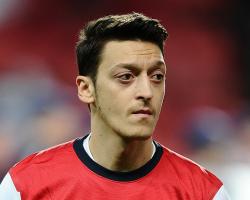 Ozil made a promising start following his ?42.5million signing from Real Madrid at the end of the summer transfer window, but has struggled to make an impact in the last few months.

That frustrating inconsistency was epitomised by a costly penalty miss in the Champions League last-16 first leg tie against Bayern Munich on Wednesday night.

The German playmaker has apologised via Facebook for the tame spot-kick, which was saved by Manuel Neuer after eight minutes of a game the Gunners would go on to lose 2-0 and all but end their European dreams for another season.

Arsenal will unveil a bronze statue of former striker Bergkamp ahead of Saturday's Barclays Premier League fixture against Sunderland.

Much like Ozil, the ex-Holland international needed time to grow into his new surroundings following a then club-record ?7.5million move from Inter Milan in June 1995, failing to score in his first seven games.

Wenger is in no doubt Ozil possesses the same elements to develop into an Arsenal great.

"Ozil is a classy player and on a longer period class tells, always," said Wenger.

"I would like to say how pleased I am that Dennis Bergkamp gets his statue, for his class, his contribution to the success of the club, and as well, a forgotten quality in the modern game, for his loyalty.

"That is why I am so happy that he gets one, and I wish that one day Ozil will get one outside the stadium as well and I will still be well enough to come and watch it."

Wenger maintains Ozil should not dwell on his penalty miss against Munich and also not be afraid to try another one when he is ready.

"Is he over it now? Certainly not, because 48 hours is a short time to get over that, but it is part of the job as well to deal with disappointment and to show that you can respond to it," Wenger said.

"He apologised after the game, but I don't think people are shocked Ozil is not Arsenal's designated penalty taker, sitting behind Mikel Arteta and Olivier Giroud, who were both not playing on Wednesday night."

Asked whether he would let Ozil take a penalty again, Wenger said: "I believe that at the moment you have to let him recover from that.

"I had examples before, with people like Dennis Bergkamp who missed an important penalty in 1999 and refused after to take any penalty (for a while)..

some other people don't mind and (take penalties) again.

"It depends on how you feel and how much you want it."

Arsenal will be without full-back Kieran Gibbs because of a hamstring injury, and Wenger is likely to rotate his squad.

Giroud had been left on the bench against Bayern in favour of rookie forward Yaya Sanogo.

The France international was in the headlines for some personal issues in the past couple of weeks, but Wenger insists the 27-year-old is in the right frame of mind.

"Some of us are different, but he is one of them who will focus completely on the pitch," Wenger said.

Sunderland are set to play Manchester City in the Capital One Cup final next weekend, with former Arsenal goalkeeper Vito Mannone helping them win a dramatic penalty shoot-out at Manchester United.

Wenger, though, is not expecting Gus Poyet's men to let their focus slip from the job in hand.

"It can happen, but let's not forget they play for survival as well," he said.

It can go both ways.

"It is always a bit on your mind certainly, but I don't think that will be a reason to expect any weakness from Sunderland - it can galvanise them and give them some special resources."