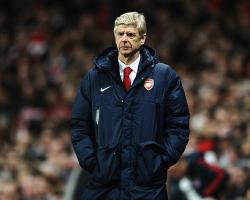 Ozil made a promising start following his B#42.5million signing from Real Madrid at the end of the summer transfer window, but has struggled to make an impact in the last few months.

That frustrating inconsistency was epitomised by a costly penalty miss in the Champions League last-16 first leg tie against Bayern Munich on Wednesday night.

The German playmaker has apologised via Facebook for the tame spot-kick, which was saved by Manuel Neuer after eight minutes of a game the Gunners would go on to lose 2-0 and all but end their European dreams for another season.

Arsenal will unveil a bronze statue of former striker Bergkamp ahead of Saturday's Barclays Premier League fixture against Sunderland.

Much like Ozil, the ex-Holland international needed time to grow into his new surroundings following a then club-record B#7.5million move from Inter Milan in June 1995, failing to score in his first seven games.

Wenger is in no doubt Ozil possesses the same elements to develop into an Arsenal great.

"Ozil is a classy player and on a longer period class tells, always," said Wenger.

"I would like to say how pleased I am that Dennis Bergkamp gets his statue, for his class, his contribution to the success of the club, and as well, a forgotten quality in the modern game, for his loyalty.

"That is why I am so happy that he gets one, and I wish that one day Ozil will get one outside the stadium as well and I will still be well enough to come and watch it."

Wenger maintains Ozil should not dwell on his penalty miss against Munich and also not be afraid to try another one when he is ready.

"Is he over it now? Certainly not, because 48 hours is a short time to get over that, but it is part of the job as well to deal with disappointment and to show that you can respond to it," Wenger said.

"He apologised after the game, but I don't think people are shocked Ozil is not Arsenal's designated penalty taker, sitting behind Mikel Arteta and Olivier Giroud, who were both not playing on Wednesday night."

Sunderland are set to play Manchester City in the Capital One Cup final next weekend, with former Arsenal goalkeeper Vito Mannone helping them win a dramatic penalty shoot-out at Manchester United.

Wenger, though, is not expecting Gus Poyet's men to let their focus slip from the job in hand.

"It can happen, but let's not forget they play for survival as well," he said.

It can go both ways.

"It is always a bit on your mind certainly, but I don't think that will be a reason to expect any weakness from Sunderland - it can galvanise them and give them some special resources."

Sunderland head coach Gus Poyet has told his players they still have time to play themselves into his Capital One Cup final team.

However, while Poyet admits he knows most of his team for the big day, there could still be opportunities available.

Asked if players will be competing for places at the Emirates Stadium, he said: "No doubt, no doubt.

"Managers will always have seven or eight we will pick if they are fit, which leaves three or four which are always available for people depending on what they do or how they feel.

"I hope nothing happens next week so I can make the decisions based on performance and what we need.

"It could be an illness, it could be a virus, it could be anything, and then somebody who is not expecting to be there then is there, and you want that person to be very good because you know the team is going to be affected.

"If (the final) was this week I would have no complaints because everybody has been spot-on, so we will see."

Indeed, Poyet is convinced, judging by what he has seen in training this week, that his players are putting every second to good use in an effort to catch his eye.

He said: "I don't want to exaggerate because then we go and we lose 5-0 and you will be laughing at me next week, but this is one of the best weeks we have had in training, one of the best.

"Call it whatever - excitement or freshness or people confident because of what they have done on the pitch or what is coming, Arsenal and Manchester City and they want to be there - you can put it down to whatever.

"But I can tell you that in terms of quality and the quantity, it's been the best week."