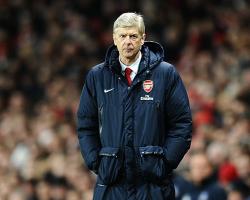 It looked all set to be another frustrating afternoon for the Gunners following a dogged display by the Eagles, who are fighting for top-flight survival.

However, England midfielder Oxlade-Chamberlain - fit again following five months out with a serious knee injury suffered on the first day of the season - finally ended Palace's stubborn resistance when he chipped in a fine pass from Santi Cazorla just after the restart.

Arsenal goalkeeper Wojciech Szczesny produced a brilliant save to deny Cameron Jerome an equaliser from a close-range diving header before Oxlade-Chamberlain struck again to make sure of victory when he combined with Olivier Giroud before running clear to beat Julian Speroni again on 73 minutes.

"We needed to get three points and it was difficult because Crystal Palace are a united team, very well-organised with a big physical quality and impact in every challenge," said Wenger, without deadline day loan arrival Kim Kallstrom, the Sweden midfielder recovering from a back problem.

"On our side we needed to be patient, intelligent and use our opportunities that most of the time come in the second half

That is what we did."

Wenger added: "Our defensive stability doesn't create unrest in the team and allows us to continue the way we want to play, even if we don't score early goals, and that's what happened today.

"At home we don't concede and that of course means you don't have to rush your game too much."

Wenger was impressed with the contribution of 20-year-old Oxlade-Chamberlain.

"I always believed that he could play wide and central, I said that many times that his future will be central

He has proven me right today, by scoring the goals but also by the quality of his performance," he said.

Wenger intends to keep an interested eye on events at the Etihad Stadium on Monday.

"It is two competitors against us and it is always interesting to see how they behave," he said.

"We gained some points through some other opponents like Liverpool and Man United over this weekend, and I think we know that our results at the Emirates (Stadium) will be massively important until the end."

Wenger accepts many pundits see the championship as City's to lose.

"I can understand that completely because we haven't done it for a while, and as well I must say that we face quality competitors," he said.

"We do not play against average teams and Man City have scored over 100 goals, so everybody thinks 'can you beat these teams?' I say yes and that is what we have to show.

The only thing I can say is that after 24 games we are there, and it's now about how we finish the season."

Palace, meanwhile, remain in a dogfight for survival, just a point above 18th-placed West Ham.

Eagles boss Pulis, though, remains ever positive his side can keep themselves out of the dropzone following what was in large parts a promising display.

"We have played Chelsea, Tottenham and Man City away since I have been at the club and we have looked a real threat against those three teams and done really well at those grounds," he said.

"We were really disappointed to give a poor goal away just after half-time and our big moment happened 90 seconds later and we don't take it, that is the difference in lots of respects."

Pulis hopes Palace's deadline-day arrivals such as Tom Ince from Blackpool and Joe Ledley from Celtic, coupled with the imminent return to fitness of forward Glenn Murray, can only boost their survival hopes.

"We want to keep our organisation and our resilience and want to show the spirit we have over the past couple of months, but those three hopefully will give us more of a threat," he said.