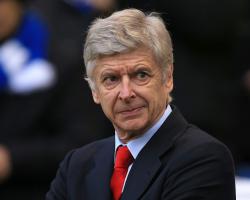 The Gunners moved level with fourth-placed Southampton and just a point behind Manchester United following a third straight league victory which capitalised fully on Saturday's draw between leaders Chelsea and Manchester City.

Despite being without leading scorer Alexis Sanchez because of a hamstring problem, Arsenal comfortably saw off the challenge of a Villa side which has now not scored in more than 600 minutes of Premier League football.

Olivier Giroud set the tone with an early goal before Mesut Ozil, Theo Walcott, a Santi Cazorla penalty and a stoppage-time effort from Hector Bellerin wrapped things up in style.

Wenger, though, feels it is Arsenal's new-found defensive resolve - with four clean sheets from the last five matches - which will be the bedrock on which to build an end-of-season charge.

"I believe that we should try to be consistent and see what happens," said Wenger.

We are 11 points behind - that means they need to lose four games and we need to win four.

"We have maybe found a better consistency, that will be very important until the end.

"Let's show that we can win more and it shows you as well that when the confidence level is higher and when everybody's back defensively, it makes a difference.

"Defensive stability is vital - when you don't have that, you suffer."

The Gunners boss was also impressed by the form of Walcott, who has returned after almost a year out with a serious knee injury and scored for the second successive game

"Theo needs to get used to physical contact, but in every game he is stronger now," said Wenger.

"I still feel he can score a goal in every game."

Wenger is not expecting a hectic final 24 hours of the transfer window.

"We have done what we wanted and unless there is a huge surprise and somebody calls me then why not? At the moment, nothing, it's very quiet," the Arsenal manager said.

Villa boss Paul Lambert, meanwhile, was left with plenty to contemplate following another poor display, his side having last scored a Premier League goal against Manchester United on December 20.

"You probably can't print the things I am thinking," said Lambert, whose side are just three points above the relegation zone and host Chelsea next weekend.

"Since I have been here it has always been fight, fight, but you have got to keep going, you don't throw the towel in, you keep going.

"We are trying to get a goal and win a game, so we just have to keep working hard."