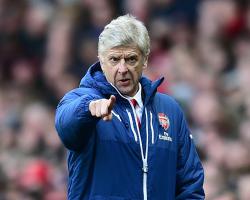 Dyke wants to increase the minimum number of home-grown players in club squads from eight to 12, but he is facing opposition from the Premier League

The proposals also include changing the rules so that 'home-grown' means having trained in England for three years before the age of 18 rather than before 21.

Only 36.8 per cent (81 out of 220) of Premier League starters in the last round of matches were eligible for England selection.

Wenger said he is keen to contribute to the quality of the England team but does not believe the number of English players in a side is the key factor in engineering that improvement.

"I believe we are in a top-level competition and you earn your right through the quality of your performance rather than your place of birth," Wenger said when asked if he agreed with Dyke's plans

"Secondly, I'm happy to, and would like to contribute to the quality of the English national team, but you have two questions you can raise before that

What is the heart of the problem?

"Secondly, if between the ages of 16 and 21 the youth teams in England win every single competition in Europe then you could say yes, there is something that we have to do because they are not getting their chance at the top level

That is not the case, on the contrary

"I think between 16 and 21 the English youth teams, until now, have not performed

So that's the heart of the problem

Let's get better at that level, then if there is a problem integrating these players in the top teams, we have to do something about it."

New England striker and Tottenham forward Harry Kane is one example, after he had loan spells at Leyton Orient, Millwall, Norwich and Leicester before his success at Spurs this season

Wenger added: "I think today you have to be very brave to integrate the young players in the top teams because the pressure is very high

"I still believe when the players are good enough, they play

You speak about (Raheem) Sterling and Kane

Nobody stops the quality, no matter where they are from

So let's focus on that first

"Apart from that I support every single measure that improves the English national team, but it has to be efficient

Sometimes what looks a good solution is not necessarily the right one."

"I welcome that intention of making it better because at the moment the development of younger players is quite difficult," Martinez said

"At the moment the development of younger players is quite difficult in the British game compared to other leagues around Europe and we need to make an effort to help it.

"One of the biggest aims we have as a club is to develop our youngsters and give them opportunities and I don't think it will affect us at all.

"It will benefit because we have the same line of thinking in terms of giving youngsters a path into the first team."