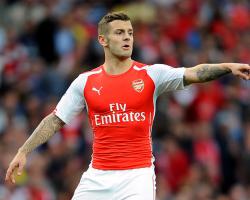 The Gunners will tackle the team they beat after extra-time in last season's FA Cup final looking to close back up on the top four following defeat away to leaders Chelsea before the international break.

Wenger knows all too well what problems Hull will pose, having watched on from the touchline at Wembley in May as Steve Bruce's men raced into a 2-0 lead before Arsenal mounted the comeback to end a nine-season trophy drought.

The summer arrivals of players like Hatem Ben Arfa, Abel Hernandez and Mohamed Diame arguably make the Tigers more of a threat this time around.

"The Hull game for us is a remembrance of a big sweat because we played against them in the cup final in a very difficult game," Wenger said.

"When you look at their team sheet now, they look like they can beat anybody so I expect a tough game.

"Look at the quality of players they got in, you can say they bought top quality."

Midfielder Jack Wilshere believes Arsenal cannot afford to drop their guard against a side looking to cement their place in the top flight for another campaign.

"Hull were a good team last year, but have improved their squad and have got a year of experience in the Premier League," the England midfielder said on Arsenal Player.

"They're going to be a hard team to play against because their players will want to do well at the Emirates."

After such a promising start, Arsenal have once again been hampered by an injury crisis.

Mesut Ozil is not expected to play again for at least two months after suffering a knee injury at Chelsea which was confirmed while on international duty with Germany.

With Calum Chambers serving a one-match suspension on Saturday, Spain international Nacho Monreal is likely to be drafted across to centre-back alongside Per Mertesacker

Midfielders Theo Walcott and Serge Gnabry were set to feature for the under-21s against Blackburn on Friday night following their knee injury problems.

Wales international Aaron Ramsey should be in contention to travel to Belgium ahead of next week's Champions League tie against Anderlecht after limping off against Tottenham on September 27 with a hamstring injury.

Hull manager Steve Bruce hopes to relive the club's "greatest day" on Saturday, but is hoping to leave with a different result.

Their last game against Arsene Wenger's side was the FA Cup final in May, Hull's first ever appearance on that stage and arguably the grandest occasion in the Tigers' history.

They did not disappoint on the day, taking a dramatic two-goal lead inside just eight minutes at Wembley before the Gunners reeled them back in and sealed a 3-2 win through Aaron Ramsey's extra-time winner.

Anyone associated with Hull would be forgiven for reminiscing about the cup run and the thrilling showpiece as they make their way back to London, Bruce included.

"The last time we played against them it was the cup final...it was the greatest day for a lot of people," he said.

"The final was a marvellous occasion for everybody

We played to our maximum and it was extra-time before we lost.

"Everyone had a wonderful day but we lost and it could have been so much more.

"We were close to pulling off one of the big shocks in an FA Cup final but it didn't quite happen.

We gave a hell of an account of ourselves and if we can repeat that on Saturday that will be great."

Bruce has few obvious injury concerns heading into the match, with goalkeeper Allan McGregor and long-term absentee Robert Snodgrass the only players left in the treatment room.

But he faces a balancing act managing a squad that has clocked up plenty of air miles during international break.

Diame, already a key player following three goals in his first four games for the club, played for Senegal in Tunisia on Wednesday and was scheduled to return to England just 24 hours before the Arsenal match, while Sone Aluko also had a short turnaround following Nigeria duty.

Bruce will be sorely tempted to use Diame if at all possible, but admitted to erring in his use of Uruguay striker Abel Hernandez last month.