Wenger refuses to rule out move for Cech 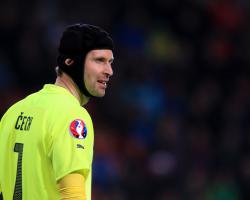 The keeper has been clear he wants to join a top club and be given plenty of first-team football after a season which has given him meagre opportunities between the sticks.

In David Ospina, Wojciech Szczesny and Damian Martinez, Wenger believes he has three world-class keepers to call on

Thierry Henry and Gary Neville beg to differ and believe a new keeper is vital if Arsenal are to challenge for the title next season:

Cech meanwhile does lead the table with four from five games.