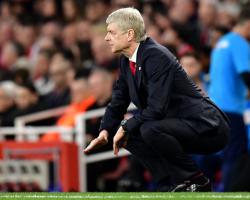 The Gunners boss has yet to decide on whether to sign a new two-year deal at the Emirates Stadium, with his current contract set to expire at the end of the season.

Fans have protested against Wenger's reign before the last two Arsenal home games as a string of poor results has seen the club drop off the pace in the Premier League title race and lose 10-2 on aggregate to Bayern Munich in the Champions League.

A 5-0 victory over Lincoln to reach the FA Cup semi-finals has not eased much pressure on Wenger - but he would not be drawn on his decision when asked about it during his press conference ahead of Saturday's trip to West Brom.

"I have nothing to say about that anymore," he said.

I've talked enough about that."

Earlier in the week it was reported that Wenger's right-hand man Primorac was set to leave and take up a managerial post in Turkey - but the Frenchman once again channelled his inner Donald Trump to play down the rumours.

"That's a complete invention," he said.

You say anything and everybody takes it without checking any information

Everybody just takes and takes it and makes a subject

Meanwhile right-back Bellerin has again been linked with a move to Barcelona having enjoyed a good season in north London.

But, like with his assistant, Wenger said there was no foundation to suggestions the 21-year-old was set for an exit.

Asked about whether he was aware of interest in Bellerin from the Catalan giants, Wenger replied: "No.

"He just extended his contract

It's an unbelievable amount of years to go

I believe again it's very difficult to take these things seriously."

Arsenal sit fifth in the table ahead of their trip to The Hawthorns and Wenger now faces a fight to maintain his record of always finishing in the top four in each of the 20 full seasons he has been at the helm.

A Champions League position is usually seen as the minimal requirement for Arsenal's directors but Wenger would not quantify what would be seen as a successful end to the current campaign.

"Success, it's not down to me to judge that," he added.

We want to play in the Champions League next season.

"We have a tough job because we have six or seven teams fighting for the places and how well we do until the end of the season will of course depend on that.

"On the rest, we are in the semi-finals of the FA Cup, we have an opportunity to do that as well

So overall that's our targets

After that, success is basically to take the maximum out of the potential of the team

Where is that? We will see."