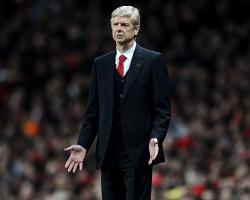 For the second successive season Arsenal face a two-goal first-leg deficit when they head to the Allianz Arena after Toni Kroos and Thomas Muller scored at the Emirates Stadium.

Had Mesut Ozil scored an early penalty things might have been different and there was a temporary reprieve when David Alaba also failed to net from 12 yards before Kroos' stunning strike finally broke down the 10-man Gunners' resistance.

"It killed the game," Wenger said.

"These rules are different in every country

In Italy they send off for these kind of fouls.

"Our keeper went genuinely for the ball

He touched Robben, who made certainly more of it

I told him (Robben).

"The game delivered what it promised at the start

The game was until then top quality and in the second half I think it was, for neutral people, boring.

"It was one-way traffic and the referee made a decision that basically killed the game."

Szczesny made an obscene gesture when leaving the field which may invite UEFA action.

Wenger did not see the Pole's reaction and also was not aware of an incident involving Robben and Bacary Sagna.

Arsenal defender Sagna believes social media talk of the Dutchman spitting on him was false.

Sagna said: "I don't think so

Things went well with me and him tonight."

"He has enough experience to know to make more of it," Wenger said

We are not used to that in England

It's different rules (in Europe) and we have to accept it."

The rules say (a foul by) the last man is a red card."

The incident was all the more frustrating for Arsenal as Ozil had spurned the chance to give his side the lead, his weak penalty saved by Manuel Neuer.

Without Mikel Arteta and Olivier Giroud on the field, Ozil was the nominated penalty taker, but he appeared less than confident.

Wenger added: "We needed that tonight because you could see that Bayern were on the ropes at the start of the game.

"We had three good chances in the first 15 minutes

I felt that to make them more insecure, we needed to score that penalty

But he missed it.

"He was affected by it

I think he wanted to do so well tonight that it affected him.

"You could see even five, 10 minutes later on the pitch he still was shaking his head

It had a huge impact on his performance."

Wenger's options to change the game were limited as Lukasz Fabianski had to come on in goal and Kieran Gibbs went off with a hamstring problem.

It meant Giroud was an unused substitute after being overlooked in favour of Yaya Sanogo, with Wenger insisting it had nothing to do with Giroud's alleged affair.

"Giroud is a strong character, and what happened doesn't influence his behaviour on the pitch," Wenger added.

"Also I wanted to give an opportunity to Sanogo, and I think he did very well."

Wenger, whose side won 2-0 at Bayern last season, exiting on away goals, refused to concede defeat in the tie.

"It isn't over because we will fight until the end," he added.

Guardiola celebrated a first win at Arsenal as a manager and praised the performance of Kroos in particular.

I'm very happy with his performance."