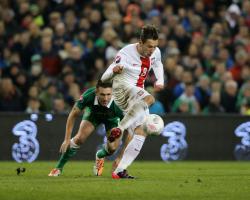 Arsenal are arguably the best in the Premier League with regard to midfield possession and interplay moving forward but they are often undone when it comes to being disposed in midfield and having to defend a counter-attack.

Another defensive-midfielder in the mix and, according to the Telegraph, also subject of a transfer is 25-year-old Polish international Grzegorz Krychowiak.

The player joined Sevilla in 2014 from Reims where he has gone on to make 36 appearances, score two goals, win the Europa League and be selected for the La Liga Team of the Season.

The transfer being figure being considered is his buy-out clause set at ÃÂ£21.26m says the Telegraph and the player who is represented by the Stella Group is understood to be interested in joining the Premier League and the prospect of Champions League football

Arseanl have so far made just one major signing in Petr Cech but are linked with strikers and midfielders with time running out.