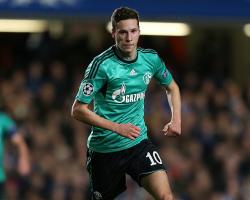 Reports had suggested the Gunners were closing in on the Germany international, 20, and that they were prepared to meet the Bundesliga side's ?37million valuation.

Wenger rejected that speculation but conceded the club were still actively looking for new recruits, with 31-year-old Sweden international Kim Kallstrom of Spartak Moscow emerging as a potential target to help compensate for the expected six-week absence of Wales midfielder Ramsey.

"The Draxler situation has been created by the newspapers, not by me," said Wenger.

"You ask me, what is that situation? I say nothing is happening on that front

He will stay at Schalke."

Wenger added: "We are open-minded and active

We look at the opportunities.

"We are still trying to bring at least one body in because we are a bit hit now by the red card for (Mathieu) Flamini, the setback of Ramsey and the fact that (Jack) Wilshere is not available, which I hope will be short term.

"We are in an area where we had plenty of players, suddenly we are a bit short

It is 80/20 and I am confident we will be able to do something today."

Arsenal drew at Southampton in midweek and were then knocked off the top of the table when Manchester City romped to a 5-1 win at Tottenham.

The Gunners, though, could regain the lead should they beat Crystal Palace on Sunday, with City hosting third-placed Chelsea on Monday night.

"The results are not made by the winter transfer market, they are made by the performances on the pitch

On that front we have shown we can be very competitive," said Wenger.

"Why should we not (believe)? We are in a position to be able to do it after 23 games with the squad we have available now, so why should we suddenly give up?"

Ramsey, 23, had been one of the stand-out performers in Arsenal's impressive start.

However, the Wales international has suffered a setback in his rehabilitation from a thigh problem.

"It is certainly a few weeks

It will be between four to six weeks

I count six, so I have no bad surprise," Wenger said.

Chelsea manager Jose Mourinho accused West Ham of playing "football from the 19th century" after being left frustrated by a goalless draw at Stamford Bridge on Wednesday, which kept them two points behind the Gunners in third place.

Wenger, though, feels you just have to learn how to deal with whatever tactics opponents present.

"When Chelsea came to us and played a 0-0, we did not manage to score

It is our responsibility to score and you accept that, no matter what problem you face, you have to be strong enough to sort it out

That is how I approach our game," he said.

Arsenal will be without Flamini for three matches following his red card at Southampton, while fellow midfielder Wilshere continues to recover from an ankle problem and should be fit to face Liverpool next weekend.