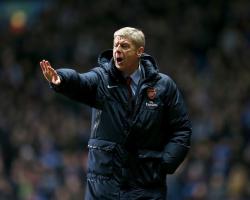 Chelsea boss Mourinho said last week that the Gunners get a certain ''influence'' when it came to their schedule, something Wenger was eager to refute as he prepared for the trip to Southampton.

"In the last five years all the objective studies that have been made show Arsenal had less rest than any other team in the top four," he said.

"That is facts. It has nothing to do with my opinion. It is an independent company that made (the study) that shows Arsenal had less rest than any other team in the top level."

It is understood that the study Wenger referred to was conducted as part of an internal analysis of Arsenal's fixture programme.

He admits he would be prepared to accept a smaller sum from broadcasters if it meant greater control of when Arsenal played.

"Nobody is to blame, it's just the way the fixtures are sold," the Frenchman said.

"It is the television who decide. I cannot even blame the Premier League because the television has the last word. If they say for example they want Arsenal v Liverpool on Sunday, it will be on Sunday.

"I can understand the television but the question you can ask, the way when it is sold, (clubs) take Â£50million less and keep the command."

When asked if he would do that, he added: "Yes, but I am in football."

February will see the Gunners face Liverpool twice - once in the Barclays Premier League and also in the fifth round of the FA Cup - as well as Manchester United and Bayern Munich.

The Liverpool cup encounter is scheduled to be played on the weekend of February 15-16, just a few days ahead of the Champions League last-16 first-leg showdown with the Bundesliga giants on Wednesday, February 19.

No date has yet been set for the Liverpool match but as one of the stand-out ties it is almost certain to be televised, which could see Arsenal preparing for the Munich clash with a Sunday afternoon kick-off against the Reds.

The Gunners boss would like to see a rule set across all leagues to make sure everyone prepares the same ahead of key European ties.

When asked if he felt more could be done to help his side prepare for European competition, Wenger said: "Let's turn it the other way around, you cannot do less; because you do nothing. In other leagues (they help), yes.

"I already suggested in a UEFA meeting to make sure in the Champions League that the teams have the same time of rest.

"For example, in Porto they cancelled the games sometimes. The day before the Champions League they cancelled a game. For the competition it would maybe be better if all the teams had exactly the same rest."

Wenger believes that is necessary to factor in the highs and lows of football, which he compared to the life of a drug user.

"Sometimes after a game you go on a high and it is like a guy who takes drugs. You go on a high, energy, you have to go down and to have a bit more time helps you to be up for it again," he said.

"We went out to Blackburn (in the FA Cup last season) and it was a humiliation and to recover from that in three days is very difficult."

With Arsenal still alive in three competitions - they can go four points clear in the Premier League on Tuesday if they win at Southampton - but as they look to earn a first trophy in nine years, Wenger is not planning to prioritise any competition.

"We are not at a stage where we can have a choice," he said.

The exchange, though, is nothing to do with mind games, according to the Arsenal boss.

"It is not mind games. It is opinions. But I don't live with opinions, I live with facts. And the facts don't depend on me or Mourinho," he said.

"It is depending on objective analysis. A day is 24 hours. And you count how many times you have rest between games.

"I did (not) make this study, it was made by an independent company. I cannot influence that."

Wenger makes the trip south with a doubt over Jack Wilshere's ankle, but he does have Mikel Arteta (calf), Aaron Ramsey (thigh) and Thomas Vermaelen (calf) fit again.