Wenger stays out of Sterling debate 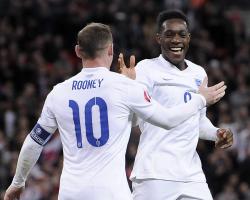 Welbeck was forced to miss the midweek international friendly in Italy after suffering a minor knock during the Euro 2016 qualifier against Lithuania at Wembley, where the forward scored in the 4-0 win

Sterling was also on target for England last Friday, but then returned to his club as part of a pre-arranged agreement with Liverpool

The 20-year-old is currently stalling on a new deal at Anfield, insisting it was not all about money after rejecting a ÃÂ£100,000-a-week offer

Arsenal had been linked with a summer move for Sterling, which the player described as "quite flattering".

Wenger, though, was not about to be drawn on any such speculation ahead of what is a key battle in the race to secure a top-four Premier League finish.

The Arsenal manager said: "Raheem Sterling is a top player, everybody in the country knows that now

He is a very important player for Liverpool of course.

"I do not want to speak about any move

We are not in a transfer period, we are in front of a big game.

"I respect Liverpool and I do not want to go into any supposed move for any of their players."

Wenger added: "I don't want to interfere in (reports over contract negotiations), especially 48 hours before the game

That's down to Liverpool, it is not my problem."

Welbeck has produced consistent displays for Arsenal since his deadline move from Manchester United, and Wenger feels the 24-year-old can continue to grow.

"When you look at him now I believe that technically he is much more mature, more composed in front of goal, the quality of his runs is getting better and he has huge, huge attributes," Wenger said.

Wenger has yet to decide whether to use any of those players this weekend, but revealed he had now given consideration to the future of midfielder Diaby, whose time at the club has been hampered by a run of injury setbacks.

He has to make a decision," said Wenger, who indicated he hoped for a positive outcome to contract extensions for both captain Arteta and Czech midfielder Tomas Rosicky.

I will see where we go from there.

"I wouldn't like to go into details, we have to meet again to see where we go from what I told him

It has to be linked a little bit with his presence."

Wenger, meanwhile, stressed there were no major issues surrounding Mesut Ozil's trip to a Berlin nightclub on Saturday March 21, when he had missed Arsenal's win at Newcastle through illness.

"He went out for half an hour to a birthday of his friend to wish him well and then went home," said Wenger.

"I am not going soft on discipline

I have fined people when they work for us and don't respect the discipline.

"On that front (with Ozil), I don't think you can stop anybody from wishing happy birthday to a friend when he is in his own country."

Arsenal resume the Premier League campaign looking to maintain momentum, having won all their last six matches in all competitions, and are currently third in the table and some six points ahead of fifth-placed Liverpool.

"It is a big game and an opportunity for us to continue our strong run," said Wenger.

"Liverpool is a big opponent, but we play at the Emirates and we want to do it."