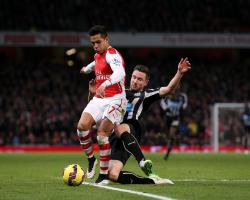 Olivier Giroud and Santi Cazorla both scored twice as the Gunners chalked up a second 4-1 victory in the space of five days to close back up on the top four of the Barclays Premier League.

There were few signs of the recent discontent from Arsenal fans as chants of "There is only one Arsene Wenger" were heard during the closing stages and the atmosphere at the Emirates Stadium turned full of hope again heading into the hectic Christmas schedule.

Arsenal remain in sixth place, but are now level on points with Southampton and two behind West Ham, who they play at Upton Park on December 28.

Despite the positive mood, in stark contrast to that of last weekend when the 65-year-old was subjected to a volley of verbal abuse as he boarded the train back to London after the 3-2 defeat at Stoke, Wenger knows you are only as good as your next result.

"In the last six games we have won five, (but) we need a few more wins to completely lift the confidence," said Wenger, who confirmed he expected midfielder Aaron Ramsey to be sidelined for 'a few weeks' with a hamstring injury.

"You could see at some stage we were a bit edgy when it was 3-1 and the crowd as well felt the ghost of Anderlecht here a little bit, so we need a few more games."

Wenger has faced down the critics this season, with some fans making banners calling for an end to his 18-season reign.

The Gunners boss will, though, continue to take the bad with the good.

"On one side, we benefit from it because our supporters become extremely popular

On the other side, the negative is that everybody talks about it and has opinions that are maybe a little bit more difficult to live with when it doesn't go well," he said.

Unlike at Stoke where they had trailed inside 19 seconds, Arsenal started strongly against Newcastle, and went in front through a powerful header from Giroud on 15 minutes.

After Danny Welbeck had seen a goal ruled out for what looked a harsh foul, Cazorla doubled the lead with a neat finish at the start of the second half.

Giroud soon made it 3-0, clipping the ball in at the near post, only for a diving header from Ayoze Perez to briefly threaten a Newcastle revival before Spaniard Cazorla added a late fourth with 'panenka' penalty, on his 30th birthday.

Cazorla said: "The team had good experience and we had the right spirit

We need to play every game like we did.

"Now we have to prepare well for a big game against Liverpool and enjoy Christmas with the team."

Newcastle had beaten Chelsea last weekend to inflict a first defeat on the Premier League leaders.

Alan Pardew's side, though, were unable to reproduce that performance, missing influential midfielder Moussa Sissoko and defender Steven Taylor through suspension, against an Arsenal side which was depleted by injury.

Newcastle take on Tottenham in the Capital One Cup semi-final on Wednesday night, but will be without Daryl Janmaat after the Dutch defender's late booking at the Emirates Stadium, and they then host north-east rivals Sunderland.

Pardew said: "We have got a big week in front of us, and Saturday's results have certainly gone in our favour.

"We are still in a great position in the league, so we have to wipe our nose with this one and move on.

"We have a massive cup tie now and then if we can just get through this (Christmas) period now with another seven, eight or maybe nine points, then we are going to be in a great position and that is what we have to focus on."