Wenger sure winning run is nigh 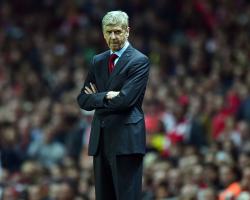 The Gunners remain unbeaten in the Barclays Premier League after Alex Oxlade-Chamberlain's close-range strike cancelled out a breakaway goal by Nacer Chadli for the visitors.

However, after being unable to breakdown a determined Spurs rearguard, led by a superb captain Younes Kaboul, during the closing stages, Arsenal had to settle for a point and their fouth draw from the first six matches.

The Gunners were forced into two early reshuffles when first captain Mikel Arteta hobbled off with a calf problem before Aaron Ramsey pulled up after a hamstring injury just before the break.

England midfielder Jack Wilshere turned his ankle in the first half, after a challenge from Danny Rose which on another day might have been a penalty, but was able to play on until being subsitued on 63 minutes.

Wenger has already ruled Ramsey and Arteta out of next weekend's trip to leaders Chelsea, while the extent of Wilshere's injury will also be assesed in the build-up to the Champions League game against Galatasaray on Wednesday night.

Arsenal enjoyed the better of possesion against Spurs, but found clear chances difficult to come by and French goalkeeper Hugo Lloris in top form, clawing a close-range header from Per Mertsacker off the line in the second half one of several top drawer saves.

Wenger, though, remains confident his men will soon find a way to close out matches again.

"The positive is that we are unbeaten, but the negative is that we have missed four points from the quality of the games we have played," said Wenger.

"Somewhere we have to keep that unbeaten record and I think at some stage we will win the games instead of drawing.

"Against Tottenham, we would have won had we not conceded the first goal."

Defender Mertesacker, who took the armband from Arteta, believes Arsenal can push on.

"We know that we have good team spirit in the dressing room, so we have to show it on the pitch," he said.

"(Against Tottenham) we showed it in a good way, but we can do better, much better.

"Overall it was a good performance and confidence is getting back."

Spurs, meanwhile, were able to produce a response from the shambles of last weekend's home defeat by West Brom.

Manager Mauricio Pochettino handed a Premier League debut to 23-year-old midfielder Ryan Mason, and set his team up to play on the counter.

Although with little real impact other than the breakaway goal, after Christian Eriksen had wrestled the ball from Matheiu Flamini just inside the Arsenal half, captain Kaboul believed his team proved they are heading in the right direction.

"We had to show another face from the West Brom game, which we did, especially at the back," Kaboul said.

"We countered very well and did not let them do everything they wanted, so now, we need to carry it on."