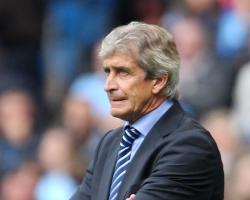 The defending Barclays Premier League champions had taken the lead at the Emirates through Sergio Aguero and Pellegrini was left infuriated as he felt the two goals which saw Arsenal turn the game around should have been cancelled out due to fouls in the build up.

The Chilean was also angry at what he perceived as a handball inside the box by Jack Wilshere, who coolly levelled for the Gunners before a sweetly-struck Alexis Sanchez volley put Wenger's men ahead.

Martin Demichelis rescued a point for City with a late header, but it was the performance of Clattenburg that was the focus of Pellegrini's post-match media duties.

"Arsenal scored both goals with fouls, of course he cost us victory," he said of Clattenburg.

"Their first goal was unbelievable, there was a push on Sergio Aguero but the referee didn't want to whistle.

That was right in front of the referee as well.

"There was a clear penalty, twice against the hands of Wilshere, in front of the linesman

This was a clear penalty

I don't have a problem with this referee.

"I think we had more possession and had more chances

On a normal day we had to win this game."

Wenger was upset at what he labelled 'systematic fouls' on his players but admitted the pace of the contest made it a hard game to officiate.

"It was a game of top quality between two very good teams played at a tremendous pace, especially in the first half," he said.

Both managers were frustrated

I heard that Pellegrini was not happy with some decisions from the referee, all of them maybe.

It was not an easy game to referee.

"There were situations were there was a fight for the ball, they made a foul then we made a foul and the guy who came out with the ball has been allowed to go.

"I don't think it has been a vicious game, it was just a committed one where players went for the ball with their full commitment."

Wilshere had looked strong for England in their win over Switzerland playing in a deeper role but Wenger deployed him further up the pitch for Arsenal as the 22-year-old put in one of his best performances of late.

Jack is coming back physically to his level where he can be," said Wenger.

And it looks today that he found it on a consistent level over 90 minutes.

Arsenal could have taken an early lead had debutant Danny Welbeck not seen a deft chip come back off the post after being clear through on Joe Hart's goal.

Although Wenger conceded his new striker may have been better putting his foot through the ball, he was pleased with the contribution of the former Manchester United man.

"He did well, I believe he needs to develop his link play with our players but that is normal," he said.

"It is sad that he couldn't take his chance but overall, when he had a chance to develop his pace, he looked dangerous

We have some things to work on with him but I'm happy with his first game."

Welbeck was replaced late on with cramps but should not feel any lingering effects, whereas Wenger fears full-back Mathieu Debuchy may be sidelined for some time after falling awkwardly towards the end of the game, with the Arsenal manager confirming the former Newcastle defender suffered a badly sprained ankle.