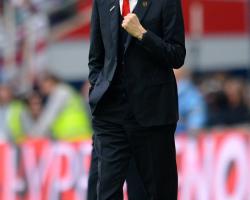 Wenger's side ripped Aston Villa apart at Wembley on Saturday to retain the oldest knockout trophy in football.

Theo Walcott, Alexis Sanchez, Per Mertesacker and Olivier Giroud found the net as Arsenal recorded the biggest win in an FA Cup final since 1994.

Wenger may have had has critics over the second half of his 19-year Arsenal reign, but he is now only foreign manager to have won the FA Cup six times.

The only other man to have achieved that feat is George Ramsay, who managed Villa from 1884-1926.

"I am very proud of that," the Arsenal manager said.

"If it has not been done [since then], it shows it is not easy and all of us want to achieve things that are difficult

For the club it is great, we won it 12 times, more than any club

Personally I managed in seven finals and we won six."

Wenger has improved Arsenal's standing in the league this season, finishing third to guarantee direct entry into the Champions League.

The Arsenal boss hopes the momentum gained from this emphatic win will help his team finish two places higher next season.

"I think of course we can push on," he said.

"Why not? We have won the league in the past when we had the potential to do it and that is what we want to do again."

Giroud has led the line for most of the season, but was named on the bench on Saturday.

Wenger started with Walcott after he scored a hat-trick against West Brom last week and the England international repaid him in fine fashion, putting the Gunners ahead with an opportunistic finish in the 40th minute.

"I had to make some big decisions today," the Frenchman said when asked about Walcott's inclusion ahead of Giroud.

"I thought the pace would be a problem for them

I knew if we were able to do that we would be dangerous."

With just 12 months left on Walcott's contract, his future at the club is in doubt.

The 26-year-old has been linked with a move to Liverpool, but Wenger wants him to stay.

"I don't see why he should not be here next season," Wenger said.

"He is a player who was out for a year (through injury) and it took him a while to come back to his best and I think he is now at an age when it is very interesting.

"He has experience and is at his peak physically

It is the time to stay with us."

Wenger seems in no hurry to leave the Emirates Stadium either.

"I have two more years of contract and I will sit down with my directors and see how much they believe and trust," he said.

Wenger had nothing but kind words for his players after the final whistle.

Mesut Ozil proved a menace all afternoon with his ball control and great vision.

The same was true of Santi Cazorla, who was named man of the match after setting up Walcott and providing the corner that Mertesacker clumsily deflected in off his shoulder.

"It was a convincing win," Wenger said.

"I never felt the focus or the quality dropped and overall it became comfortable for us."

The best goal of the afternoon belonged to Sanchez, who signed from Barcelona for ÃÂ£30million last summer.

Five minutes after the break, the Chilean found the net from 25 yards off the underside of the bar.

''I've had limited opportunities (to play alongside him) but when I've been on the pitch with him me and him have linked up very well, he's a flash player, he's very talented,'' Walcott said of his team-mate.

He said: "We have good midfielders and at the moment we are not looking at Arturo Vidal."