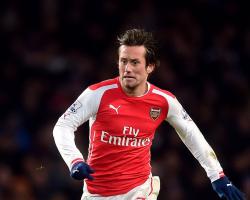 Rosicky, who agreed a contract extension at the end of last season, has been struggling with a knee problem since June following international duty with the Czech Republic, and is set for another lengthy spell of rehabilitation.

Wenger suggested the club were reluctant to place any specific time frame on the recovery of the 34-year-old, who has endured a string of fitness issues over his Arsenal career.

"Tomas has had surgery on his knee

His agent said he will be out for one or two months, but it will be longer

How long exactly, we don't know yet," Wenger confirmed to the club's official website, www.arsenal.com.

The prognosis on Wilshere, however, is more positive.

The England international had impressed during the pre-season trip to Singapore and in the Emirates Cup, but picked up another frustrating injury on the eve of the FA Community Shield against Chelsea at Wembley.

Wilshere is understood to have been recuperating in Dubai to help aid his natural healing process.

Wenger added: "We said Jack would be out for four weeks, and he's in the second week now so he's on schedule."

Arsenal should have full-back Hector Bellerin available again for the trip to Crystal Palace on Sunday after sitting out the 2-0 home defeat by West Ham, but while Wenger says forward Danny Welbeck is "making good progress" from a knee problem, he is not expected to feature.

A surprise inclusion on the bench against West Ham was Alexis Sanchez, who had just returned to training following an extended break after helping Chile win the Copa America.

Wenger revealed the tenacious forward was keen to get back into action again.

He said: "Alexis Sanchez is fit, he's been working hard and is ready for the weekend."

Arsenal continue to be linked with a big-money move for Real Madrid forward Karim Benzema, but following the disappointment of defeat to West Ham, when summer signing Petr Cech endured a nightmare debut, Wenger maintained the immediate resolution must come from within.

"I knew we had a very difficult schedule from the start and that is why we have to be on our toes very quickly and respond very well now," Wenger said to Arsenal Player.