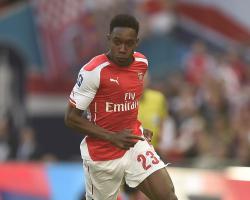 Welbeck missed the win at Hull because of a knee problem, and has not trained since.

Ramsey, meanwhile, suffered a heavy kick to his leg against the Tigers, where he scored in the 3-1 victory.

Wenger confirmed: "Welbeck is doing better, but he is still not in training, he has missed now more than a week.

"There is no major damage, but we have to see how it progresses over the next two or three days."

While Welbeck may not recover in time for Arsenal's second successive Monday night kick-off, the prognosis on Ramsey is more positive.

"From the Hull match we had Ramsey who took a big kick, he is getting slowly better

He could be back in training soon," Wenger said on the club's official website, www.arsenal.com.

Captain Mikel Arteta, meanwhile, is continuing his rehabilitation having been out since the end of November following a calf injury and then an ankle problem, but remains "short" for the Hull game, says Wenger, as does midfielder Alex Oxlade-Chamberlain following an inflamed groin.

Full-back Matheiu Debuchy returned from three months out after shoulder surgery to play in the FA Cup semi-final against Reading at Wembley, but has since picked up a hamstring problem.

The France international is confident the Gunners can last the distance next season, having paid for a slow start to the campaign back in the Autumn but recovering to win 18 out of 22 games in all competitions since the turn of the year.

"I am convinced that we will challenge for the title [next season]," Debuchy told Arsenal Player.

"Every big club wants to win it, Arsenal is a big club and it is definitely a target for us all."

The former Newcastle defender added: "Of course it is not finished yet but so far, it is a good season.

"We have picked up a lot of wins, a lot of good results.

"I really hope we can carry on playing well until the end, and if we do we will say it was a good season."