Wenger unsure when Ox will return 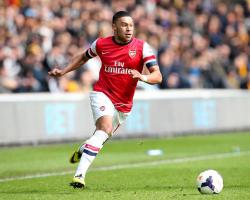 The 20-year-old missed Monday night's 3-0 win over Newcastle at the Emirates Stadium because of a niggling groin problem, after which Wenger indicated he would need at least two weeks' complete rest.

Arsenal could seal up fourth place this weekend, when they host West Brom on Sunday after Everton play Manchester City, and head to Norwich for the final Barclays Premier League match before then finishing their domestic campaign with the FA Cup final against Hull at Wembley on May 17.

By then, England manager Roy Hodgson will have named his provisional 30-man World Cup squad.

Wenger, though, remains cautious over the rehabilitation of Oxlade-Chamberlain, who like Jack Wilshere - recovering from a fractured foot - will be desperate for a place on the plane to Brazil.

"Alex is in treatment at the moment and not in training

It is very difficult to give you a timescale on him at the moment," Wenger said to the club's official website, www.Arsenal.com.

Full-back Kieran Gibbs is also sidelined by a hamstring problem, but is set to resume full training shortly

Midfielder Abou Diaby will not be rushed after reporting a minor groin problem following his return from a serious knee injury in the under-21s.

Arsenal have opened up a four-point lead over Everton, and should the Toffees come unstuck at home to title-chasing Manchester City on Saturday, then the Gunners would be secure of a place in next season's Champions League qualifiers before they tackle the relegation-battling Baggies on Sunday lunchtime.

Defender Laurent Koscielny maintains the Arsenal players, who were knocked out by Bayern Munich in the second round this season, always strive to challenge themselves against the best Europe has to offer.

"The Champions League is a tournament which has the best teams in Europe so we want to play against the big teams because we can judge our level against Milan, Barcelona or Bayern," the France defender told Arsenal Player.

"For the players it's very exciting to play against them because we learn a lot and you progress [individually].

"If you win it's a very exciting game so we want to come back to the Champions League because we love it.

"We are focused for the other games because the season is very long and we want to play Champions League again because it's the most exciting competition for us.

"We did well this season apart from two months which were very difficult for us, but we came back."