Wenger unsure who captained Arsenal in second half against Manchester City 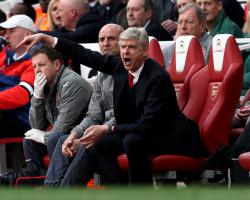 The under-fire Frenchman made the startling revelation on Tuesday morning when he was asked who took the armband from Laurent Koscielny when he was forced off at half-time with an Achilles problem.

With club captain Per Mertesacker not on the pitch and stand-in Petr Cech out injured, there were still likely candidates in the shape of Theo Walcott or Alexis Sanchez.

But it was unclear who, if anyone, had taken the responsibility from Koscielny with Wenger conceding he was not sure who was skipper as the Gunners fought back to seal a 2-2 draw against Pep Guardiola's side on Sunday.

After ruling both Cech and Koscielny out of Wednesday's clash at home to West Ham, Wenger said he was unsure who would lead Arsenal out before making the admission he did not know who had finished Sunday's game as captain.

"I don't remember," he said

"It is a good question

Nobody asked me who is captain

I will have 24 hours to think about that."

Premier League rules state a captain must wear an armband at all times and they may ask the club for an explanation.

Laurent Koscielny led the side in the first half for the 2-2 draw at the Emirates but came off at half-time and did not appear to have been replaced by a nominated skipper for the second half.

Protests have been held before the last three home games and a handful of supporters stood outside Arsenal's training ground on Tuesday morning as they bid to prevent Wenger signing a new deal.

The Frenchman's current contract runs until the end of the season but he is yet to announce whether he will stay or go after a run of just three wins in 10 games.

Speaking at a pre-arranged supporters forum on Sunday, chief executive Ivan Gazidis said the recent form should be a "catalyst for change" - although he was not talking specifically about Wenger.

And the 67-year-old said he wants to continue to learn but that he has no plans to suddenly change the way he operates.

"That has nothing to do with you to change," he replied when asked about reinventing himself.

"That is something you do to improve

That is evolution, not change.

"Change is the heart of who you are

Evolution? Yes...The structure is there as it is today

We have fantastic conditions to do better

A spectacular change of structure now would be very difficult.

But at the end of the day, good players on the pitch is more important than anything else

Wenger also had little time for the protesters stood outside Arsenal's London Colney training base, one sporting a Wenger mask and surrounded by anti-Wenger banners.

He said: "It is three guys

Why should I waste energy on that

I don't know what to say

It is good that they can waste their day like that.

"The problem in our game today is that what is superficial is the heart of the debate and the things that are important nobody talks about.

"You never read about the performance of one individual person on the pitch, you read only about all the rest.

"Maybe the rest sells newspapers but it doesn't really matter

I love the game, the difficulty of the game

All the rest I can live with

It's only superficial talks that do not add anything to the beautiful game."