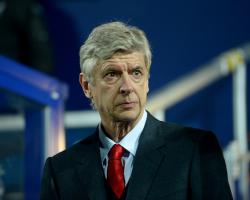 The Gunners head to Turf Moor in search of what would be an eighth straight league victory, following on from last weekend's 4-1 triumph over Liverpool.

Despite their superb run, which has seen confidence grow after some 15 wins in the last 17 through all competitions, the title remains Chelsea's to lose, as the leaders currently hold a seven-point advantage and also a match in hand.

While some Gunners fans may have allowed themselves a little bit of fantasy football results over the run-in, which will see Chelsea come to the Emirates Stadium on April 26 and also play both Manchester United and Liverpool, Wenger remains very much focused on the job in hand.

"I have enough experience to know that I have to live with reality and reality is points and the next game," he said.

"The dreams are for everybody - we all have dreams at night, but when I wake up in the morning I have to come here and make sure we give everything to win the next game."

"What we want is to go as high as we can until the end of the season, give our best and we are also in the semi-final of the FA Cup.

"So we are at an important moment of the Premier League season and it is a period where you show your quality by focusing on the next game and maintain the quality.

"Of course we want to continue to progress and improve - we can learn from victory as well and everything was not perfect in our last game."

Arsenal's injury problems look to have finally eased, with midfielders Mikel Arteta, Jack Wilshere and Abou Diaby all having stepped up their rehabilitation from injury, along with full-back Mathieu Debuchy.

England international Alex Oxlade-Chamberlain, though, continues to be hampered by an inflamed groin, while centre-half Laurent Koscielny will face a fitness test on his thigh problem ahead of Saturday's match.

Burnley continue to scrap at the other end of the table, currently second bottom, but only two points from safety.

With Manchester City having gone down 1-0 at Turf Moor last month and Tottenham then held to a goalless draw, Wenger is not taking the trip to Lancashire lightly.

He said: "You shouldn't look at the table because they started slowly, but recently they have played very well against all the big teams in the league and are quite efficient at home.

"You have to be at their level of physical performance, because they will be there.

"On the rest, you want to produce the quality of performance that is expected from us on the technical side, but you have first to fight with them physically, that's for sure.

"We have to make sure we produce the expected performance on the commitment, on the focus and on the quality of our game."