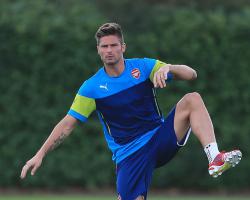 He sustained the injury in Saturday's 2-2 draw with Everton.

"Olivier will not play against Besiktas and will see a specialist, then we'll make an announcement of how long he'll be out," Arsenal manager Arsene Wenger said.

The loss of Giroud, who struck the injury-time equaliser at Goodison, has robbed Arsenal of their first-choice striker.

"It can be (a long term injury)

It's sad for us," Wenger said

Summer signing Alexis Sanchez is likely to operate as the loan striker against Besiktas, although there are doubts about his ability to perform the role