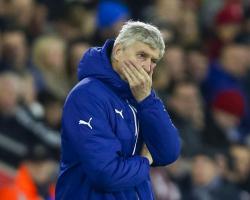 The Gunners have come under fire once again for failing to produce the required performance with an abject European display to lose the first leg 3-1 at the Emirates Stadium on Wednesday night, a result which leaves them on the brink of elimination ahead of the quarter-final stages once again.

Wenger maintains he is not immune to criticism, but is hurt more by the defeat than what the pundits have to say or anyone's rants on social media.

However, the Frenchman intends to now focus on the challenges ahead, with the visit of Everton on Sunday the opportunity for an early response to cement their place in the top three of the Barclays Premier League.

"It is always hard (to watch the match again), it is hard to see that you make mistakes," said Wenger, set to be without England midfielder Jack Wilshere, after a minor procedure to remove a stud in his ankle which was causing some discomfort.

"We are all human beings

We were born without any guarantee that we would not make mistakes."

Wenger added: "What is difficult is switching my mindset from disappointment (of defeat) to Premier League.

Having watched the game again, we started quite well and the goal against us was a big blow.

"We were shocked that we were 1-0 down after we rushed our game.

"We lost our discipline and everybody became too individual, we were too impatient, then we lost our game a little bit.

"Apart from that, we are on a strong run

This is a different competition and it is just important we continue our run in the Premier League again."

He said : "I don't think Arsenal will suffer from a psychological setback after what happened in their last game

They have incredible experience in these sorts of games."

In contrast to the Gunners, Everton are going into the game off the back of a European high, having comfortably completed a 7-2 aggregate victory over Young Boys by seeing them off 3-1 at Goodison Park on Thursday to advance into the Europa League last 16.

However, Martinez is not underestimating the benefit an extra day's worth of preparation will have for Arsenal, and has also pointed to the league form of Wenger's side.

"It is true that an extra 24 hours in terms of recovery makes a big difference," the Spaniard said

"We need to make sure we are fully fit and refreshed

"We expect an Arsenal fully focused on trying to carry on the outstanding form they have in the league, and we'll have to be at our very best.

"Arsenal have only had one home league defeat and we know we have a real difficult task in front of us.

"But at the same time, after our result last weekend, we are desperate to perform well and get a good result."

Everton were held to a 2-2 home draw by bottom side Leicester last Sunday, a game which took their recent league record to only two wins in 14 games.

Martinez guided the Toffees to a fifth-placed finish last season, but this term they have struggled for momentum domestically and have been 12th for the last few weeks.

It has been in stark contrast to an impressive European campaign, in which the manager feels his players have been more free of the pressure of expectation.

And Martinez hopes his side, with a top-four spot now certainly not on the agenda, can play in a more liberated style in the league.

He said: "We have gone into league matches feeling too much responsibility, like we have something to lose rather than something to gain, and I think in the Europa League it has been completely different - from a mental point of view, it has just been an opportunity to beat the opposition and show what we can do.

Romelu Lukaku came off early in the second half of Thursday's match, but Martinez has played down suggestions a hamstring problem might keep the Toffees striker out of the game on Sunday.

Everton have John Stones and Aaron Lennon back available, having been suspended and cup-tied respectively on Thursday