Wenger wants Gunners to kick on 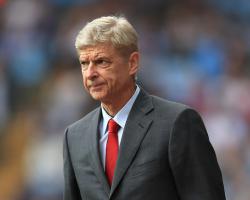 The Gunners host Galatasaray on Wednesday night looking to recover from a terrible performance in their opening game away to Borussia Dortmund, where they lost 2-0

After the visit of Galatasaray, who needed a late equaliser to salvage a 1-1 home draw with Anderlecht, Arsenal will travel to Brussels at the end of October, before hosting first the Belgians and then Dortmund ahead of a final fixture in Istanbul on December 9.

Wenger hopes his team can show high quality after battling through a tense two-legged play-off against Besiktas to secure Champions League football for a remarkable 17th consecutive campaign.

"It is the second important block now," said Wenger.

"The first massively important game for us was Besiktas after the World Cup to get through and to start well in the Premier League.

"Our start was decent and now is the second block of games that will show how strong and good we are."

Arsenal's defeat at Dortmund was a first loss in 15 matches in all competitions for last season's FA Cup winners, whose run of five straight Barclays Premier League victories at the end of 2013/2014 saw them secure fourth place ahead of Everton

Despite a relatively poor away record in Europe, Arsenal's form at the Emirates Stadium remains largely solid.

The midweek Capital One Cup defeat by Southampton - for which Wenger had selected a much-changed side - was only Arsenal's second home loss in 19 matches of 2014, the other being a 2-0 reverse against Bayern Munich in February's last-16 Champions League tie.

Galatasaray, meanwhile, have not won in nine visits to English clubs, with six defeats.

New manager Cesare Prandelli will be hoping to improve on the result from the Turkish side's last trip to London, back in March, when a team bossed by Roberto Mancini side lost 2-0 at Chelsea in the round of 16 following a 1-1 draw in Istanbul.