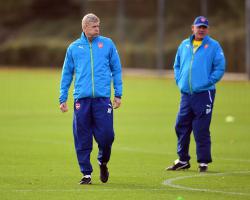 The Gunners needed a stoppage-time equaliser from Danny Welbeck to salvage a 2-2 Barclays Premier League draw with Hull at the weekend having again conceded sloppy goals.

Arsenal - without both first-choice keeper Wojciech Szczesny through suspension and Colombia international David Ospina due to injury - cannot afford any more costly errors at the Constant Vanden Stock Stadium in Brussels if they are to stay on course for qualification out of Group D, having already been well beaten away to leaders Borussia Dortmund in their opener.

"We have lost only one game in the Premier League, but we have not enough points with what we produced," said Wenger, whose side have won just two from eight league matches.

"Top-level performance is to make the maximum with your potential and sometimes in games you need a fraction more, so that is what we want to do - give a fraction more to be really efficient in what we do."

Wenger, who will have England international Calum Chambers available again after a one-match domestic suspension, added: "We want to become more efficient, where we dominate so much, like we did on Saturday, and lose a bit of our defensive urgency.

"If you look overall at the quality of the players we have, I think we can be very efficient defensively."

Although Martinez, 22, has just two Arsenal appearances - in the Carling Cup in late 2012 - Wenger believes spending a loan period in the hustle-and-bustle of the Sky Bet Championship with Sheffield Wednesday will have served as good preparation for what awaits in Brussels.

"(I am) extremely confident, because he has experience from Sheffield last year and when he played for us, he did very well

I have no special worry about that," said Wenger.

"He is two years older now (than his last Arsenal match), has a good experience

He has grown in stature as well.

"We have to make sure that we make it as comfortable a night as we can for him, and that is by defending well as a team."

Teenager Ryan Huddart, 17, will be on the bench against Anderlecht.

Wenger revealed concern over the recovery plan for Ospina, who suffered a thigh setback when coming on for Szczesny after the Pole was shown a red card during the second half of Arsenal's 4-1 win over Galatasaray three weeks ago.

"He is out for two to three months, now we have to be really careful because it is a recurrence of a thigh injury, which is very difficult

It is a long-term injury," Wenger said.

Wenger turns 65 on Wednesday, but intends to stay very much focused on the job at hand.

"No I am not a celebrator of birthdays

I just think what is important tomorrow is that my team performs well," he said.

"Do I feel young? No, because my age is my age and you have to deal with that, but until now I am lucky to be in good shape - the desire and the motivation is stronger than ever."