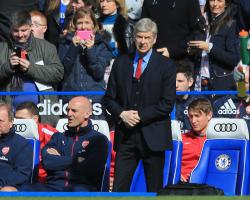 Three Chelsea supporters face life bans from football after being suspended from Stamford Bridge by the Barclays Premier League club as part of the ongoing investigation into the events of Tuesday evening on the Paris Metro.

A commuter, identified in media reports as French-Mauritian Souleymane S, was blocked from entering a train by what appeared to be a group of fans travelling to the Parc des Princes for the Champions League match against Paris St Germain

Blues manager Jose Mourinho used his pre-match media conference on Friday to express the club's disgust at the whole affair, but also looked to distance Chelsea from those involved, whom it was stressed did not represent the views of the majority.

"I found it sad

Have you seen the pictures? I don't know how you can find any happiness in these kind of pictures

I think even English people are shocked as that is not the image I have of English fans," said Wenger, who arrived at Highbury as an unheralded coach in October 1996.

The Arsenal manager continued: "In England you cannot say people did not fight against it

The Football Association, the Premier League, the press, you cannot say they are tolerant of it.

"Of course you accept that (responsibility) - I don't speak for me or you, I speak for a boy of 10 years old who sees that, and that is the problem.

"We are old enough and strong enough to think that is stupid."

Wenger accepts society in general still has some work to do in the on-going fight for racial equality.

"I left France a long time ago and people now tell me that I would be surprised how open racism is now and that is a worry for me," the former Monaco manager said.

"People in (French) schools are openly speaking bad language and I am surprised because I left a country that was not like that, so it is very important that we fight against it."

The French authorities are working with their British counterparts and anyone convicted could face a prison term of up to three years and a fine of up to 45,000 euros (ÃÂ£33,000).

It has been suggested governing body UEFA should also look to implement its own sporting sanctions against the clubs.

Wenger said: "I don't know if that is the best way to stop it

Can you punish a whole 98 per cent of people who are fair for not even one per cent?

"I don't think you could do that because then opponent fans could organise to put the shirt on of Chelsea and be racist, and get them deducted points."

Wenger also reflected on the hypocritical nature of such views against players idolised on the field by the same people who then chose to discriminate.

"You are against any signs of racism whether it is against a player at your club or from another club, we have to be conscious of that," he said.

"Even the racist people, when that player is black, they love him, so in that fact it is difficult to understand."