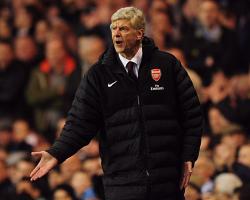 Tottenham are pushing ahead with proposals to redevelop land around White Hart Lane to accommodate a new 56,250-capacity venue, but following legal challenges in the High Court could be set for a season of ground-sharing rather than being able to move for the 2017-18 campaign as planned

Arsenal, meanwhile, are only now starting to show the benefits of the switch from Highbury to the 60,000-seater Emirates Stadium, which was self-funded and sees the north London club set aside some Â£35million each year against a long-term fixed interest rate repayment bond

The Gunners may now be able to not only hold on to top men with lucrative new contracts, but can also compete to lure the likes of Mesut Ozil and Alexis Sanchez to the club, but Wenger knows that battle to constantly deliver Champions League football while balancing the books has been a testing one

"If you look at the history of all the English clubs who have built a new stadium and look at where they have finished, then it tells you how difficult it is," said Wenger.

"I knew always that would be the most sensitive period in the history of the club.

"When we were in a position where we had to be in the Champions League just financially and you get into March/April and are like that (not in top four), t he stress is terrible because you feel the future of the club is at stake and you have not a lot of margin (for error) - every point you lose can be dramatic."

Although American investment company Cain Hoy has said it is no longer considering making an offer for Tottenham, the club are continuing " discussions with multiple providers of finance" in the search of " the optimum financing package for the project"

Wenger believes there is no doubt Tottenham will need some sort of cash injection to complete their ambitious plans.

"If an owner comes in, and says 'look I put Â£400million to buy the stadium' it is easy," he said

"The way we did it is the hardest way, because we had no outside financial help and had to negotiate with the banks just to get the money at the start - and lets not forget we paid Â£120million just for the land.

Wenger has enjoyed a fine record against Tottenham, losing only six of 43 previous matches and on Saturday will go up against a 12th different permanent Spurs manager in Mauricio Pochettino

After that if Tottenham is not competing with us it is somebody else," he said

Wenger indicated he could deploy Mesut Ozil in a central role again on Saturday, the German having made such an impact in the 3-0 win at Aston Villa before a much-changed Arsenal team were beaten 2-1 at home by Southampton in the Capital One Cup on Tuesday night

By contrast Wales midfielder Aaron Ramsey has returned a couple of uninspiring displays, but Wenger has every confidence Arsenal's player of the season will soon be on form again.

" You have always to come back to basics - what is my job? A midfielder, to win the ball and give a good pass," said Wenger

"After a consequence of that, and Aaron's natural engine, is he will have chances, but if you play (like) 'I have to score' and every time you want to be in the box, (then) you forget a little bit the basics of the job."